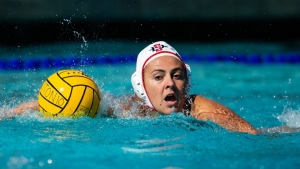 The Guachos outscored SDSU 4-0 in the first quarter. SDSU was able to close the gap to 5-3 early in the third quarter but then UCSB pulled away with six unanswered goals.

For the second game in a row the Aztecs scored five goals without a player scoring more than one. Mary Myers, Maddy Parenteau, Hannah Carrillo, Casia Morrison and Karli Canale all scored.

SDSU scored their goal early in the second quarter when Parenteau found the back of the net. The Gauhcos were held to one goal in the second and fourth quarter.

Hannah Carrillo scored with 1:12 left in the second quarter and the Aztecs struck again a minute into the third quarter to pull within two points. After the Gauchos’ 6-0 run, SDSU scored the final two goals (Myers and Canale).

This was the second straight game the Aztecs have scored five goals with five different players scoring.