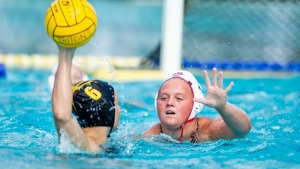 The Aztec jumped out to a 3-0 lead and held a lead until the Spartans tied it up at 8-8 with 4:56 left in the fourth quarter. SDSU then was outscored 2-1 in overtime.

The Aztecs scored three goals in the first four minutes to open up a 3-0 lead and ended up entering the second quarter with a 5-2 advantage. The five goals were the most SDSU has scored in the first quarter this year.

The Spartans would score the next two goals to pull within one point, but SDSU quickly extended their lead back to three (7-4) with goals from Shelby Kraft and Karli Canale.

The Aztecs would enter the fourth quarter with an 8-7 lead but failed to score and the Spartans tied it up to force overtime.

The Spartans scored the first two goals in overtime. The Aztecs were able to score but it came with just ten seconds remaining.

Maura Cantoni had a season-high 17 saves.

The Aztecs will wrap up the Barbara Kalbus Invitational with a 9:00 a.m. game Sunday against No. 21 CSUN, who beat SDSU 7-3 two weeks ago.