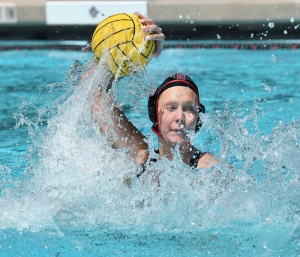 January 20, 2019 (Honolulu) - The No. 19 San Diego State water polo team (1-2) lost to T-No. 6 Hawai’i 17-9 in the finale of the Rainbow Invite Sunday morning. The Aztecs won their season opener against Sonoma State then fell to Marist 7-6 before today’s defeat at Hawai’i.

Shelby Kraft led the Aztecs with four goals and Mary Myers had two. Hannah Carrillo had a team-high three assists.

Hawai’i scored four goals in the first four minutes of the game to open a quick 4-1 lead. The Aztecs responded with two goals to cut the deficit to one, the first coming on a power play.

In the second quarter, Hawai’i scored the first two goals to push their lead back to three. Mary Myers then scored with 5:10 left, but Hawai’i would score the next three goals to hold a 9-4 advantage. Down the stretch of the first half, SDSU alternated goals with UH and the score was 10-6 at the halftime break.

Hawai’i netted the first two goals of the second half to push the score to 12-6. Each team would score two more goals in the third quarter to bring the score to 14-8 entering the final frame.

The Aztecs were outscored 3-1 in the final quarter to earn the 17-9 victory.

SDSU’s Maura Cantoni had eight saves but allowed 16 goals and had a save percentage of 0.333. Mia Harris also collected a save and allowed one goal. Hawai’i’s Molly DiLalla allowed six goals and made four saves and Bridget Layburn allowed just three while making six saves.

The annual alumni game takes place next Saturday. The Aztecs next regular season action will be Feb. 9-10 at the Triton Invitational.