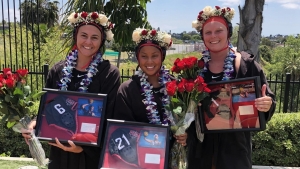 The Tritons scored the first eight goals of the game, but the Aztecs only allowed them to score one in the first quarter. UCSD would score five in the second quarter however and took a 6-0 lead into the halftime break. The Aztecs were 0-for-13 in the first half and 0-for-7 on power plays.

UCSD scored the first two goals on the third quarter but then the Aztecs would score five of the next six goals. Shelby Kraft scored back-to-back goals to cut the deficit to 8-2. Her first came with 2:16 left after she skipped in through a crowded box. She scored again with 38 seconds remaining, finishing a Maddie Higginson assist.

SDSU outscored the Tritons 3-1 in the fourth quarter but couldn’t overcome their early deficit.

The Tritons’ goalkeeper Bennett Bugelli collected 14 saves and held the Aztecs to 5-for-31 shooting.

The Aztecs finish their regular season with a 15-14 record.

The Aztecs begin the GCC Tournament on Friday in Fresno, Calif. They will be the No. 2 seed after going 5-2 in conference play and open against the No. 7 seed Santa Clara who they beat 4-1 earlier this year.