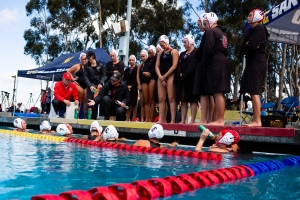 Emily Bennett led SDSU in scoring in both games

Emily Bennett led the Aztecs with three goals in their first game against the Sun Devils. SDSU entered the fourth quarter down 9-7 but then saw Arizona State score three unanswered goals.

Arizona State got on the board first with a goal two minutes into the match. Bennett scored the first of her two first quarter goals just 36 seconds later, but then ASU scored back-to-back goals. The Sun Devils would lead for the rest of the match.

ASU took a 4-2 lead into the second quarter but the Aztecs struck first to cut the lead to one on a Hannah Carrillo goal. The teams would alternate the next eight goals; every time SDSU got within one the Sun Devils had an answer.

Aside from Bennett’s three goals, Hannah Carrillo netted two and Lucilla Carballo and Shelby Kraft each had one. Maura Cantoni collected seven saves.

In the Aztecs’ second game, they pulled even with the Matadors at 3-3 early in the third quarter, but couldn’t find the back of the net again and CSUN scored four straight to earn the 7-3 victory.

Emily Bennett once again led the Aztecs in scoring with two goals. Delaney Binette had the other goal for SDSU.

The Matadors scored the first two goals of the game and then Bennett scored with just eight seconds left in the first quarter. The Aztecs wouldn’t score again until there was 1:16 left in the second quarter, which brought the score to 3-2 CSUN.

Bennett scored her second goal of the game with 6:20 left in the third to pull even at 3-3. The Matadors would score two goals in the third quarter and then add two more in the fourth.

The Aztecs will take on Pomona-Pitzer, who also lost both their games  on Saturday, at 8:00 a.m. Sunday morning. After that, they will play at either 1:20 or 2:40 p.m.  13th place is the best possible outcome for the Aztecs.