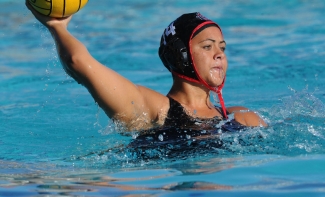 The Scarlet and Black will face the Chinese National Team on Jan. 11 at JSerra Catholic High School in San Juan Capistrano and then follow it up with the yearly Alumni game on Jan. 27 at Aztec Aquaplex. Both exhibition games start at 11 a.m. PT.

The regular season will officially begin in Providence, Rhode Island, where San Diego State will participate in the Bruno Classic at Brown University, Feb. 3-4. The Aztecs open at 3 p.m. ET vs. Harvard and then close opening day vs. Wagner at 7:40 p.m. ET. On the second day of the tournament, SDSU will face Hartwick at 9:45 a.m. ET and then finish out tournament action vs. Brown at 1:30 p.m. ET.

The schedule will then take the Aztecs to the Triton Invitational in nearby La Jolla on Feb. 10-11, then to Orange County for a pair of contests -- one regular season, one exhibition. First up is SDSU’s Golden Coast Conference lidlifter vs. Concordia on Feb. 16 at 1:30 p.m. PT. Then just down the road from the Eagles’ home in Irvine, the Aztecs will travel south to Newport Coast to face the University of Toronto in an exhibition at Sage Hill School at 5 p.m. PT.

The following weekend, San Diego State will head back to Orange County for the Barbara Kalbus Invitational, which is hosted by UC Irvine. The three-day event will take place Feb. 23-25.

After spending the first month of the season away from Montezuma Mesa, SDSU will make its home debut on March 9, vs. GCC foe Loyola Marymount. First sprint will take place at 4 p.m. PT. Less than 24 hours later the Aztec Invitational will commence. The tournament, which runs from March 10-11, will feature seven teams, including SDSU. The Aztecs will face Harvard (9:30 a.m. PT) and Sonoma State (3 p.m. PT) on March 10, and Hawai’i (11:15 a.m. PT) and Bucknell (3:30 p.m. PT) on March 11.

SDSU will head to O.C. for a third time on March 16, for a non-conference date vs. UCI. The Friday night contest will begin at 5 p.m. PT. San Diego State’s non-league schedule will continue at home vs. Princeton on March 19, at 3 p.m. PT. Later that week on March 23, the Aztecs will step back into GCC action with a road game at Azusa Pacific (5 p.m. PT).

San Diego State will play three of its next four games at home, beginning with a date vs. Cal State Monterey Bay on March 25 (5 p.m. PT). A brief trip to Morro Bay to face California on March 28 (5 p.m. PT) breaks up the homestand, which will conclude with conference games vs. California Baptist (April 5; 4 p.m. PT) and Fresno State (April 7; noon PT). The game vs. the Bulldogs will serve as Senior Day.

The regular season will end with three consecutive road games, starting with GCC contests at Pacific on April 13 (7 pm. PT) and Santa Clara in the league finale on April 14 (1 p.m. PT). April 20 will bring the annual game vs. UC San Diego with the Harper Cup on the line. The clash will begin at 6 p.m. PT at Canyonview Aquatic Center.

With the regular season behind them, the Aztecs will head to Los Angeles for the Golden Coast Championship in Los Angeles. The tournament will run from April 27-29.

This year's team will feature a roster that includes 11 freshmen, five sophomores, five juniors and just four seniors, including co-captains Courtney Jarvis and Lizzy Bilz. The group will be the 20th of Carin Crawford's head coaching career.

Crawford in 19 seasons has compiled a record of 414-257 (.617) and has led the Aztecs to a top-17 national finish every year. Outside of the program's five Golden Coast titles (four regular season, one tournament), Crawford has guided SDSU to the NCAA tournament in 2007 and 2008 with at-large invitations, and in 2016 with an automatic bid.

The Aztecs will officially open practice on Monday, Jan. 8, and the balance of their 2018 schedule will be announced in the coming weeks.