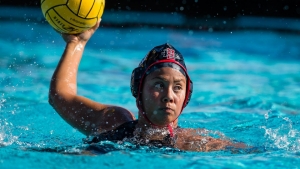 Aztecs have won six of their last seven

April 3, 2019 (Seaside, Calif.) - The No. 20 Aztec water polo team won for the sixth time in their last seven games with a 17-6 win at Cal State Monterey Bay Wednesday evening. The 17 goals were a season-high for the Aztecs.

Goalkeeper Maura Cantoni played the first half and allowed just one goal while collecting eight saves. Granite Hills alum Mia Harris replaced her and allowed one goal in the third quarter and managed to dish out two assists from goal.

Emily Bennett got the Aztecs on the board three minutes into the game after putting away a Hannah Carrillo assist. Monterey Bay responded quickly but then 11 straight goals to put the game far out of reach. Carrillo scored all four of her goals in a nine-minute stretch.

SDSU outscored CSUMB 6-1 in the third quarter. Their six goals were the most they have scored in a quarter all season.

SDSU’s 17 goals was a season-high. Their six third quarter goals also set a new season-best for goals in a quarter.

Prior to this Wednesday, the Aztecs didn’t have a game where two players had four goals or more – they had three (Emily Bennett, Hannah Carrillo and Haley Hagerty).

The Aztecs California road trip continues Friday when they play at T-No. 15 Fresno State at noon.