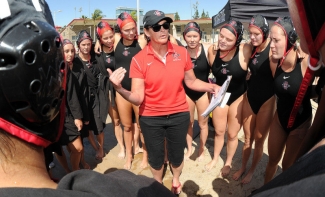 November 13, 2017 (San Diego) - Valhalla High School girls water polo standout Spencer Samuel has signed a letter of intent to play water polo at San Diego State for the 2018-19 school year.  The utility has been a starter in her three years at VHS and has helped the Norsemen to the CIF Open Division playoffs each season, advancing as far as the semifinals in 2016, after claiming three Grossmont League titles. A scholar-athlete in 2017 in both water polo and swim, the two-time team captain is a multi-year All-American, all-CIF performer and two-time Grossmont League Player of the Year (2016, 2017). Samuel enters her senior season with 253 goals, 148 assists and 261 steals in her career.

“Spencer is a versatile utility player with great size and speed,” SDSU water polo head coach Carin Crawford said. “She uses her speed and quickness well on both sides of the ball, but I expect her to make a difference for us right away on the defensive end of the pool. Spencer will be one of the top players in the San Diego Section this season and I believe she has her best water polo in front of her.”