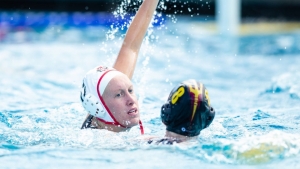 March 6, 2019 (San Diego) -  The No. 22 San Diego State water polo team (5-7) knocked off Villanova 14-2 in their home opener, putting together their most dominant performance of the year. The Aztecs had a season-best 14 goals while allowing a season-low two goals.

A complete team performance, 11 different Aztecs scored. Emily Bennett led the team with three for her second hat trick of the year, Karli Canale had two and Spencer Samuel had her first career goal and dished out two assists. Samantha Loughlin also netted her first career goal. SDSU scored 14 goals on just 29 shots, their best shooting percentage of the season (.483).

Defensively, the Aztecs had 12 steals and allowed Villanova to attempt just 17 shots. Hannah Carrillo and Karli Canale each had a team-high three steals.

For the first time this season, the Aztecs played three goalies. Maura Cantoni played the first two quarter and allowed one goal and made two saves. Mia Harris saw action in her fourth game and recorded three saves in the third quarter. Zoe Morgan made her first appearance of the season and collected two saves.

The Aztecs had a season-high 14 goals on a season-best .483 shooting percentage.

The Aztecs will play four games in the Aztec Invitational Friday and Saturday. Their first game is against Azusa Pacific Friday at 3:00 p.m., which will also serve as SDSU’s GCC opener.