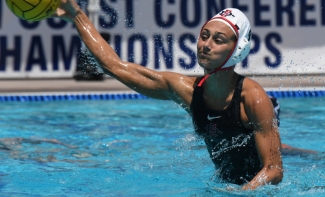 April 28, 2018 (Los Angeles) - Third-seeded and 21st-ranked San Diego State found itself trailing after one quarter and battled back to tie the score twice in the third quarter, but could not complete the comeback, ultimately falling to second-seeded and No. 15 Loyola Marymount 10-7 in the semifinal round of the Golden Coast Championship Saturday afternoon in Los Angeles.

The Aztecs fell to 14-16 overall and will play in the third-place game on Sunday, while the Lions secured a spot in the title game and improved to 18-14.

Similar to its quarterfinal game on Friday morning vs. California Baptist, SDSU found itself in 3-1 hole after one quarter of action. All-GCC first-team selection Hannah Carrillo put the Aztecs on the board first with a goal less than two minutes into the contest (6:11). The Lions scored three unanswered goals with the last coming with 31 seconds left to carry a 3-1 lead into the second frame.

Morgan Molloy, who scored LMU’s second goal of the day, found the back of the net on a power play to open the second-quarter scoring, pushing the Lions’ lead to 4-1 with 6:54 to go before intermission. The Aztecs started to chip away at their deficit with less than six minutes showing on the clock when Karli Canale was successful on a penalty shot (5:49). Thirty seconds later, Katrina King supplied San Diego State with its third goal of the afternoon to help it get to within 4-3. Then in the final two minutes, Hana Vilanova scored on a 6-on-5 and Canale added another goal, this one with five seconds remaining in the half, helping the visitors close the gap at 5-4.

Canale’s freshman classmate, Emily Bennett, who was an all-GCC second-team choice, made her presence felt early, producing the equalizing goal less than 90 seconds into the second half. LMU moved out in front 6-5 on a Katie Hungerford goal (5:25), only to have Bennett provide another game-tying strike (6-6) with 2:59 to go in the stanza. San Diego State, however, could not get out of the quarter tied, allowing single tallies from Molloy (2:43) and Vilanova (0:32) to trail, 8-6.

The Lions used their late-third-quarter momentum to open the fourth and received a third goal from Vilanova (6:59) almost immediately and one from Lauren Owens (4:51). SDSU’s offense, meanwhile, could not find a seam and found itself down 10-6 after the Owens goal. Shelby Kraft ended the Aztecs’ drought with 1:40 left, but that would be the last time San Diego State would be heard from in falling to the home-standing Lions.

The Aztecs were led by the freshman duo of Emily Bennett and Karli Canale. Each scored twice and were responsible for more than half of SDSU’s goals (4 of 7). Six of San Diego State’s seven goals were scored by non-seniors.

Emily Bennett drew six of San Diego State’s 13 ejections. In two Golden Coast Championship games, the freshman has drawn 15 ejections and has drawn 15 of the team’s 25 ejections in the tournament.

The Aztecs will face fourth-seeded Azusa Pacific on Sunday at 12:45 p.m. in the third-place game of the Golden Coast Championship. SDSU defeated APU during the regular season in overtime 10-8 on the road. Live video and stats will be available from LMU with the links provided at GoAztecs.com.