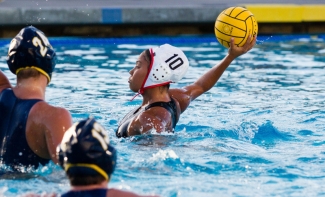 A local product from The Bishop’s School, Carrillo produced 40 goals, 15 assists and 32 steals to go with 27 drawn ejections and 17 field blocks. Among her teammates, she is tied for first in assists (Maddy Parenteau), second in goals, steals (tied, Lizzy Bilz) and ejections drawn, and third in field blocks. Carrillo also led the squad in hat tricks (6) and multi-assist games (4, tied with Emily Bennett), had the second-most multi-goal (13) efforts and recorded the third-highest total in multi-steal outings (7). The driver was a scoring machine to close the season, posting at least one goal in 10 of her final 11 games, tallying 21 goals during that time. The first-team appointment is her second GCC honor and comes after earning a spot on the all-league freshman team in 2016.

Bennett was one of two San Diego State student-athletes to be voted to the all-Golden Coast second team and lone Aztec on the all-freshman team. The freshman from Oakdale led SDSU in virtually every statistical category. She posted team-high figures in goals (42), steals (58) and ejections drawn (55), ranked second in field blocks (25) and third in assists (14), just one behind co-leaders Carrillo and Parenteau. Bennett also led the Aztecs in multi-goal games (14), multi-assist outings (4, tied with Carrillo) and multi-steal performances (16). She is the second freshman in program history to land on one of the top two GCC teams, joining student assistant coach and former All-American Ioli Benekou, and the fourth named to the all-freshman squad.

Cantoni landed on the all-GCC second team after starting for the first time this season. The junior goalkeeper from San Jose played in 25 games and made 203 saves with a 7.92 goals-against average. She had nine of San Diego State’s 10 double-figure save efforts, including four in her last five outings. Cantoni made a career-high 14 stops against California Baptist and had 13 denials on three different occasions. This is the fifth straight season in which an Aztec goalkeeper has earned all-Golden Coast recognition.

San Diego State returns to action on Friday morning when it faces CBU in the quarterfinal round of the Golden Coast Conference Championship. The third-seeded Aztecs and the sixth-seeded Lancers are set to play at 9:15 a.m. at LMU’s Burns Aquatics Center.

Player of the Year: Kyra Christmas, UOP (SO, ATT)