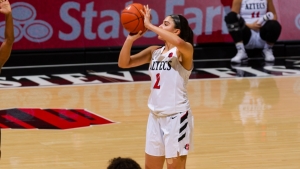 December 9, 2018 (Northridge) - The Aztec women’s basketball team (5-4) fell at CSUN 77-74 Sunday evening.  After trailing by 23 points early in the fourth quarter, the Aztecs came roaring back behind the hot shooting from freshman Sophia Ramos and pulled within a point with 28 seconds left and had two chances in the closing seconds, but ultimately fell just short.

Najé Murray had 19 points and had seven rebounds and was a perfect 8-8 from free throw line. Mallory Adams had her third double-double of the season after scoring 13 points and grabbing 11 rebounds.

The Aztecs came out with newfound intensity in the third quarter and cut the deficit to 12 points midway through the third quarter, but CSUN responded and pushed their lead to 23 points after a cold shooting stretch for SDSU.

SDSU had one more run in them, however. They began the fourth quarter on a 22-4 run and pulled within single-digits with 3:56 left behind Ramos’ barrage of three-pointers.

A Murray lay-in closed the gap to two points with 51 seconds left. Following a pair of free throws from CSUN, Ramos hit another three to pull the Aztecs within one point with 28 seconds left. The Matadors’ Serafina Maulupe knocked down both free throws and Ramos had another shot, although it was blocked by Channon Fluker, her 11th rejection of the game. Maulupe got the rebound was fouled but missed both free throws giving SDSU one more chance. Ramos got a tough shot up from 30 feet out in the final seconds but it missed, ending the Aztecs’ rally.

The Aztecs made 13 field goals through the first three quarters but made 11 in the fourth quarter alone. They also cut down on their turnovers and had just three in the second half after having 11 in the first half.

CSUN was led by Serafina Maulupe’s 22 points. Channon Fluker had 18 points and 11 blocks and Jordyn Jackson had 16 points.

All seven of Sophia Ramos’ three-pointers came in the second half and six of them came in the fourth quarter, a new SDSU record for three-pointers made in a quarter. Entering the game Ramos had made just 11 threes through nine games.

The Aztecs scored just seven points on 2-for-18 shooting in the first quarter. Their previous first quarter low was 11 against Hawai’i in their season opener.

Mallory Adams finished with 13 points and 11 rebounds for her third double-double of the year. She also has had two games where she was one point or rebound away from a double-double.

The Aztecs are off until December 21st when they host UC Santa Barbara for a 1:00 p.m. game. It will be the Aztecs third straight game against a Big West team.