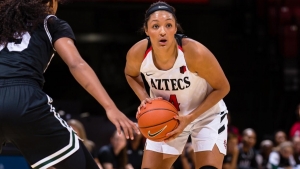 SDSU played stifling defense all game and held the Cardinals to 21 percent shooting and forced 24 turnovers, which led to 25 Aztec points. The Aztecs gave up just one field goal to Incarnate Word in the second and third quarters combined.

“We played a little more zone than we have in the past,” Head Coach Stacie Terry said after the game. “I think we got better at that. We take pride in our defense and that’s something that’s going to be constant for us all year in order to give us a chance to win. Anytime you can hold a team to less than 40 points, you’ve done a great job.”

Sophia Ramos and Téa led the Aztecs in scoring with 13 points each. Ramos also had a team-high five assists. Also scoring in double-digits was Monique Terry (12), Najé Murray (12) and freshman Jayden Perez (11). Terry and Perez both notched career-highs.

Aside from a rocky start in the first three minutes of the game, the Aztecs held a comfortable lead for the entire game. They fell behind 12-7, but then outscored the Cardinals 37-3 for the rest of the first half, including a 26-2 advantage in the second quarter.

The Aztecs once again held the Cardinals at bay in third quarter, outscoring them 13-2. Incarnate Word shot a combined 1-31 in the second and third quarters.

The Aztecs held a commanding 46-32 advantage on the glass and were led by Mallory Adams’ nine rebounds. Baylee Vanderdoes collected eight rebounds, her second straight game with at least eight boards.

The Aztecs scored 21 fast break points, many of those coming off turnovers, and had 44 points in the paint.

The Aztecs outscored the Cardinals 39-5 in the second and third quarters and held UIW to 1-for-31 shooting in that span.

“We got better today. Our bench players were able to get a lot of opportunities and a lot of minutes. As we get deeper in this rotation and deeper into these games, our bench is going to be key for us. Giving them these experiences to grow and get a lot of reps is going to be beneficial for us down the stretch.” Coach Terry

Both Jayden Perez (11) and Monique Terry (12) had career-highs today. For Perez, it was her first collegiate points. Terry bested her previous best of eight points and knocked down two three-pointers, the first of her career.

This is the second straight year the Aztecs have started the season 3-1.

The Aztecs host the SDSU Thanksgiving Classic next week. They will play Cal Baptist Friday at 5:00 p.m. and TCU Saturday at 7:15 p.m.