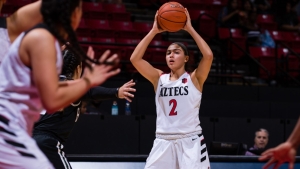 November 24, 2018 (San Diego) - The San Diego State women’s basketball team (4-2) had their three-game winning streak snapped with an 81-64 loss to TCU (4-1) in the final game of the SDSU Thanksgiving Classic Saturday evening.

TCU, who went to the WNIT final four a season ago, used their size and length to make things difficult for the Aztecs offensively. SDSU was held to 33 percent shooting while the Horned Frogs connected on 48 percent of their field goals.

The Aztecs were led in scoring by Najé Murray and Sophia Ramos, who each had 14 points. Mallory Adams had another big game on the glass, collecting double-digit rebounds (10) for the second game in a row while scoring nine points. She averaged a double-double over the past two games and represented the Aztecs on the SDSU Thanksgiving Classic All-Tournament Team.

TCU jumped out to an early lead after a 10-2 run gave them a 15-7 advantage. The Aztecs were whistled for five fouls in the first four minutes, including two on their leading scorer, Téa Adams. Between the fouls and eight turnovers, SDSU found themselves down 25-16 at the end of the first quarter. This was the most points the Aztecs have allowed in the first quarter this season.

The Aztecs couldn’t cut their deficit to single digits the rest of the game, although they cut it to ten a couple times, including with six minutes left in the fourth quarter. However, TCU responded with a 7-0 run to put the game out of reach.

TCU was led by Kianna Ray, who scored 23 points on 8-for-12 shooting. Jordan Moore had 17 points and Amy Okonkwo added 12.

The Aztecs had 19 rebounds which amounted to a season-high 23 second-chance points.

TCU’s 25 points were the most the Aztecs have allowed in the first quarter this season.

Despite being undersized compared to TCU, the Aztecs had 41 rebounds to the Horned Frogs’ 37. They haven’t been outrebounded in a game all season.

It was the second game in a row the Aztecs shot over 30 free throws.