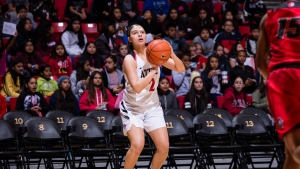 The Aztecs led by ten early in the fourth quarter and by seven with four minutes to go but only scored two more points and saw their lead dwindle to two. New Mexico had the ball with a chance to tie or win on the last possession but Jayla Everett’s baseline jumper rimmed out at the buzzer.

“It was the defense that won the game for us,” head coach Stacie Terry said after the game. “We’ve been talking a lot about our defense and our goal is not to give up 60 points and we did that today. We’ve talked a lot about how every great moment is formed from a great opportunity. I thought today would be our great opportunity so I’m glad it worked out for us.”

Sophia Ramos continued her fantastic freshman campaign to lead the Aztecs with 21 points on an efficient 9-for-14 shooting. Zayn Dornstauder notched her first career double-double with 11 points and a career-high 11 rebounds. Mallory Adams just missed out on her fourth consecutive double-double and finished with 10 points and eight rebounds.

New Mexico made five of their first six shots and ended up shooting 50 percent in the first quarter to take a 18-13 lead, but they wouldn’t shoot better than 30 percent in any other quarter as the SDSU defense tightened up.

The Lobos missed eight of their first nine shots in the second quarter and the Aztecs took their first lead since being up 2-0 with 1:34 left in the quarter.

New Mexico scored the first three points of the second half but then SDSU went on an 11-0 run to take a 41-33 lead midway through the third quarter. The Lobos responded with a 9-1 run only to see the Aztecs score the next eight points.

The Aztecs went up 10 after Ramos nailed a three-pointer with 7:50 left and then the Lobos started to chip away. They cut the deficit to two with 1:54 left, but Mallory Adams pushed the lead back to four with a layup with 1:29 left. After a pair of free throws from Jaisa Nunn, who had a game-high 27 points, the Lobos were down 61-59 with 31 seconds left but still had two fouls to give.

New Mexico fouled the Aztecs twice and then when going for another foul to put SDSU on the line, the Aztecs turned the ball over giving the Lobos a chance to tie or win with 11 seconds left. Following a timeout, the Lobos got a good luck from Jayla Everett on a 15-foot baseline jumper at the buzzer, but it rimmed out.

This was just the second time the Lobos have been held under 60 points. They were just 3-for-26 from three, a season-best defensively for the Aztecs. Meanwhile SDSU was 47 percent from deep (8-17).

“I love these education days. I really felt like we had a home-court advantage today, and that was huge for us down the stretch when we made shots and got stops. It made it challenging for me to communicate to my team, but that’s a problem that I welcome.” Head coach Stacie Terry on the crowd of 4,272 for Field Trip Day.

The crowd attempted to set the world record for most people simultaneously doing the “floss dance” during the first timeout of the third quarter. It is now pending review from the Guinness Book of World Records.