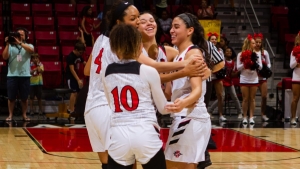 November 23, 2018 (San Diego) - The Aztec women’s basketball (4-1) won their third game in a row with an 83-67 win over California Baptist in the first game of the SDSU Thanksgiving Classic Friday evening.

The Aztecs have scored at least 80 points and had four scorers in double digits in each of their last three games. Najé Murray knocked down five three-pointers and had a team-high 17 points.  Mallory & Téa Adams each had 16 points and Mallory hauled in a career-high 11 rebounds to notch a double-double. Baylee Vanderdoes chipped in 10 points and freshman point guard Sophia Ramos dished out nine assists and had five steals, both career-highs.

Similar to the Aztecs’ last game, they started out slow but used a dominant second quarter to take a double-digit lead at half. SDSU missed their first four shots and the Lancers made five of their first six to take an early six point lead. The Aztecs then tightened up their defense and used a 10-0 run to take a 28-23 lead.

Behind 14 points on four three-pointers from Najé Murray, the Aztecs held a 45-28 lead at the halftime break. Téa Adams also chipped in 11 while Mallory Adams had eight rebounds and Sophia Ramos had six assists.

The Lancers got as close as 11 points midway through the fourth quarter, but the Aztecs responded with a 10-2 run to put the game out of reach.

The Lancers were led by Brittany Thomas who had 28 points and 13 rebounds, both of which were the most an opposing player has had against the Aztecs this season.

The Aztecs forced CBU in to 20 turnovers and scored 27 points off those miscues.

This is the best start to a season (4-1) for the Aztecs under Stacie Terry (6th season).

The Aztecs have combined to outscore their opponents 51-7 in the second quarter in their last two games.

This is the first time the Aztecs have scored 80 points or more in three straight games since January of 2017.