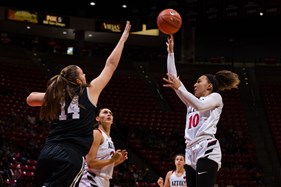 November 9, 2018 (San Diego) - The Aztec women’s basketball team knocked off Hawai’i 58-57 in their season opener Friday afternoon inside Viejas Arena. Téa Adams hit a difficult driving lay-in to give the Aztecs the lead with seven seconds left and then SDSU got a stop on the other side of the floor to secure the victory.

“This win means a lot, especially for this team,” Head Coach Stacie Terry said after the game “To be able to win a game, early on, tight like this, is only going to help us grow because we can go back and say we’ve been in these situations and this is what we’d like to do. We’re still young and trying to figure it out. Every single win is going to be cherished this year, so this is a huge momentum builder. Hawai’i is a very good team, and I know there 0-2, but they’re better than that.”

Adams led the Aztecs with 15 points, going 7-for-13 from the field, and hauled in six rebounds. Najé Murray and freshman Sophia Ramos also had double-digits, with each of them scoring 14 points.

The Aztecs led for the majority of the game, but saw their lead slip away in the fourth quarter after a cold stretch of shooting. Hawai’i took their first lead of the second half with 1:27 left, going up 57-56.

The Aztecs got the ball back with 35 seconds left to set up Adams’ heroics. She took the ball at the top of the key with six seconds on the shot clock and drove to her left and scored on a runner through traffic with second seconds left. SDSU played lock down defense on the ensuing possession to hold of Hawai’i.

After a slow start for both teams to start the game, the Hawai’i duo of Makenna Woodfolk and Julissa Tago started to heat up, scoring 17 of UH’s first 19 points to give them a three point lead. The Aztecs then responded with a 13-2 run before eventually taking a seven point lead in to the locker room at the half after Murray hit a three at the buzzer.

SDSU built their lead up to 11 midway through the third quarter, but Hawai’i began the fourth quarter on a 13-4 run to close the gap.

“[Hawai’i] changed their lineup. They went small with their five-guard lineup,” Coach Terry said. “We had two bigs in there and some of those kids got free shooting threes like number 12 and 35, who are essentially big guards. Their lineup change really affected us, so we had to finally figure it out and go small as well so we could match up better defensively. Once we did that, I think we did a better job getting back into it.”

The Aztecs had just three field goals and six turnovers in the fourth quarter, but made the clutch buckets down the stretch to earn the victory.

The starting backcourt trio of Téa Adams, Najé Murray and Sophia Ramos all played at least 35 minutes and combined to score 20 of the Aztecs’ 26 second half points.

“It felt pretty good. I missed five shots before that so I made the one that counts. That’s all that matters.” – Sophomore guard Téa Adams on game-winning shot

This is the first time two freshmen have started the season opener for SDSU since 2003 (Michelle Elliott and Courtney Fritz).

The Aztecs hit the road next week playing at Santa Clara on Tuesday and at Cal State Fullerton on Thursday.