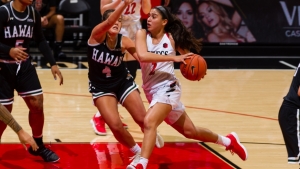 Freshman Sophia Ramos had a career-high 24 points on 10-for-17 shooting. She scored 16 of her points in the second half and dished out a team-high five assists. Najé Murray had 16 points and a career-high six steals. Mallory Adams had another monster game on the glass and finished with 10 rebounds and 12 points. It was Adams’ third consecutive game with at least 10 rebounds and her second double-double in the past three games. Zayn Dornstauder also chipped in 11 points.

The Aztecs used a 12-2 run to build a 16-8 lead with two minutes left in the first quarter. However, the Toreros then hit three-pointers on three consecutive possessions to close the gap to 18-17 at the end of the first quarter.

SDSU started slow in the second quarter and scored just two points in the first 5:30 of the second and fell behind 24-20. The Aztecs would finish the first half strong however and took a 31-29 lead in to the break.

The third quarter was tightly-contested throughout and had six lead changes and neither team led by more than three points.

The Aztecs scored the first bucket of the fourth quarter to take a one point lead and didn’t trail again until the final seconds of the game.

The Aztecs held a four point lead with 31 seconds remaining, but then the Toreros hit a three to cut the deficit to one. Following a SDSU timeout, the Aztecs turned the ball over on the in-bounds pass.

SDSU then stopped USD twice. First, they got a tie-up on the rebound, but a jump ball was called, which led to the Toreros retaining possession. After SDSU stopped USD again, Mallory Adams hauled in the rebound. With multiple Toreros at her feet, she tripped and was called for a travel, which gave USD a third chance with nine seconds left. That’s when Myah Pace drew a foul and knocked down the game-winning free-throws.

Four Toreros scored in double-digits and they were led by Sydney Hunter’s 16 points.

Najé Murray had six of the Aztecs’ eight steals.

This was the second year in a row the SDSU-USD game came down to the final seconds and the home team escaped with a one-point victory.

This was the fourth time in the last five games that at least four Aztecs scored in double-digits.

Téa Adams, the Aztecs’ leading scorer, left the game in the first quarter with an injury to her right foot.

The Aztecs return home to host Arizona Sunday at 1:00 p.m.  The game will be streamed on the Mountain West Network.