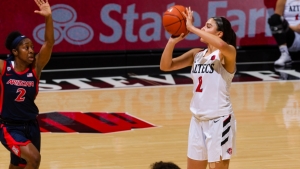 December 2, 2018 (San Diego) - The San Diego State women’s basketball team (4-4) lost to Arizona 69-60 Sunday afternoon at Viejas Arena. SDSU led by as much as 12 points in the second quarter but saw Arizona storm back in the second half with hot shooting and a tricky zone defense.

Najé Murray led the Aztecs with 16 points with ten of those coming in the first quarter. Freshman point guard Sophia Ramos notched her first career double-double with 14 points and a career-high 10 rebounds. She also had seven assists. Baylee Vanderdoes added 11 points as well.

The Aztecs got off to a quick start and jumped out with a 14-5 lead fueled by a 10-0 run. They would hold a lead throughout the remainder of the first half and take a six point advantage in to the locker room at the half.

The Aztecs cut the deficit to three points on a Murray three-pointer with 4:19 left in the game, but the Wildcats proceeded to knock down threes on their next three possessions to push the lead to 12.

The Aztecs struggled to penetrate Arizona’s zone and settled for threes where they went just 2-for-10 in the fourth quarter.

Arizona was led by Aari McDonald’s 29 points but were able to hold her to 10-for-26 shooting.

The Aztecs had assists on 16 of their 20 field goals.

The Aztecs weren’t outrebounded in their first six games but have been in each of their last two contests.

The Aztecs are on the road next week against a pair of Big West teams. They play at UC Irvine Friday evening at 7:00 p.m. and then at CSUN Sunday at 4:00 p.m.