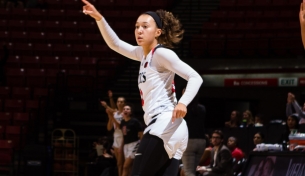 Najé Murray led the Aztecs with 20 points. Sophia Ramos bounced back from a rough first half to finish with 17 points and six assists. Her freshman counterpart Mallory Adams nearly had a double-double with 10 points and nine rebounds. The Aztecs also had key contributions off the bench from Loli Gomez and Monique Terry, who combined for 16 first half points.

The Aztecs shot well from the field for the entire first half, including going 7-for-10 in the second quarter, but struggled with turnovers. After trailing for the first one and half quarters, they went on an 8-0 run to take the lead midway through the second quarter. The Anteaters responded with a 6-0 run to retake the lead, but SDSU had a response and finished the half on a 7-0 run capped off by a Sophia Ramos bucket in the final seconds.

SDSU shot 60 percent from the field in the first half but committed 15 turnovers. Loli Gomez, who entered the game with two career points at SDSU, led the team with nine points at the half after going a perfect 3-for-3 from long distance.

Both teams cooled off in the second half and at one point, the Anteaters and Aztecs made just 1 of 19 shots. However, the Aztecs cut down on their turnovers and built their lead up to 12 points at the end of the third quarter.

UC Irvine got as close as six points midway through the fourth quarter, but the Aztecs knocked down free-throws and made key defensive stops to hold off the Anteaters’ comeback attempt. SDSU shot a season-best 84 percent from the free-throw line (16-for-19).

SDSU outrebounded UC Irvine 41-29. They have held the advantage on the glass in seven of their nine games.

The Aztecs entered the game averaging 14.6 turnovers per game but committed 15 in the first half. They ended the game with a season-high 26.

Entering tonight Loli Gomez was 0-3 in her SDSU career from three. She hit her first three three-pointers of the game and finished with a career-high nine points

The Aztecs had season bests in three-pointer made (12) and three-point percentage (60%).

The Aztecs continue their Southern California road trip on Sunday when they play at CSUN (4-6) at 4:00 p.m.  The game will be streamed on BigWest.tv.