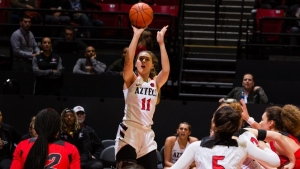 SDSU has won three in a row

The Aztecs had another standout defensive performance, holding the Aggies to 30 percent shooting overall and 18 percent in the fourth quarter. SDSU was 9-for-15 from three-point territory, tying a season-high with 60 percent accuracy.

Utah State scored the first nine points of the game and held an 18-12 lead entering the second quarter. The Aztecs committed seven first quarter turnovers and they would’ve trailed by much more if not for Sophia Ramos’ three three-pointers. All 12 of SDSU’s first quarter points came on threes.

The Aztecs also struggled to score in the quarter though and didn’t score their first two-point field goal of the game until 1:45 left in the half, a Téa Adams jumper. The Aztecs’ starting backcourt of T. Adams, Ramos and Najé Murray combined to score 24 of SDSU’s 27 first half points and the score was all knotted at 27-27 at the break.

Najé Murray hit a three on the opening possession of the fourth quarter and then Mallory Adams made a free throw to give SDSU a six point lead. The Aztecs would miss their next six shots and the Aggies tied the game with 4:40 left.

Utah State took their first lead of the second half on a Shannon Dufficy layup with 42 seconds left. On the next possession Sophia Ramos found Gómez Ferrer cutting to the basket where she was fouled with 22 seconds left. The senior entered the game shooting 46 percent from the line but calmly knocked down both free throws to give SDSU a one point lead.

The Aggies got two good looks in the paint, including one with Dufficy down low with Ramos guarding her but they missed both and Ramos secured the rebound and was fouled.

Ramos missed the first free throw but made the second and the Aggies had one more chance with 1.3 seconds left down two. After advancing the ball with a timeout, Utah State sent a lob pass towards the hoop, but the intended target, Olivia Stevens, stumbled, and the Aggies never got a shot off.

Dufficy, who entered the game as the Mountain West’s second leading scorer, scored 14 points but was just 4-for-18 from the field. She also collected 14 rebounds.

The Aggies had 23 offensive rebounds and had 16 second chance points but were held to 30 percent from the field.

The Aztecs were 9-for-15 from three, which tied a season-best with 60 percent accuracy. The had nine threes but only seven two-point baskets.

The Aztecs’ average margin of victory during their three-game winning streak is 1.67 points.

SDSU is 8-1 when holding their opponents to under 40 percent shooting.

The Aztecs will back in Viejas Wednesday night to host Colorado State at 6:30 p.m.