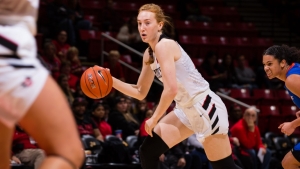 The Aztecs were once again led by Mallory Adams, who scored 17 points for the second straight game. Téa Adams had 15 and Zayn Dornstauder set a new career-high with 14 points.

A 7-0 Bronco run early in the first quarter put Boise State up 16-8 and they never looked back. BSU started the game making seven of their first ten shots with Braydey Hodgins scoring nine quick points. The Aztecs played well offensively for the majority of the first half but struggled to keep up with the Broncos’ firepower.

Zayn Dornstauder scored the first points of the second quarter to get SDSU within six points but that was the closest they would get despite making four of their first five shots. Every time the Aztecs scored, the Broncos had an answer on the other end. Boise State shot 69 percent from the floor in the first half and 46 percent from three.

The Aztecs shot 48 percent in the first frame, but their two leading scorers, Sophia Ramos and Najé Murray, were both held scoreless. SDSU led by Zayn Dornstauder’s 12 points. Boise State’s Tess Amundsen, who entered the game averaging 3.7 points, had 15 in the first half as the Broncos took a 50-35 lead in to the halftime break.

The Broncos cooled off in the third quarter, but the Aztecs did as well, and the Broncos were able to extend their lead to 19 points entering the fourth quarter.

The Aztecs were outrebounded 38-28 and BSU won the turnover battle 17-8.

Boise State had four players in double-figures and were led by Braydey Hodgins’ 22 points. Marta Hermida hit four three-pointers and had 16 points, Tess Amundson had 15 points, all of which came in the first half and A’Shanti Coleman chipped in 10.

The Aztecs play at Nevada Wednesday evening at 6:30 p.m. This will be SDSU’s first meeting with the Wolf Pack this season.