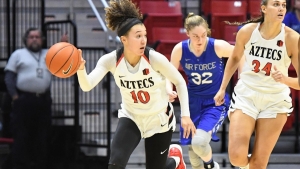 Joining Murray in double-figures was Sophia Ramos, who scored 16 and added five rebounds and five assists. Téa Adams, who has been dealing with an ankle injury had 12 points, her first time scoring in double-digits since November. Mallory Adams hauled in 12 rebounds to tie a career-high.

The Aztecs fell behind early by scores of 8-2 and 14-6 after the Falcons created extra possessions with six offensive rebounds in the first quarter. SDSU stormed back to tie it at 18-18 behind an 8-0 run and took their first lead two minutes in to the second quarter.

Najé Murray and Téa Adams combined to score 18 of the Aztecs’ first 22 points and Murray led all scorers with 13 at the halftime break. The Falcons went on an 8-0 run late in the half to take a four point lead (31-27), but SDSU scored the last three points and trailed 31-30 at the half.

The third quarter turned in to a foul fest. The Falcons committed five fouls in the first 2:30 of the quarter and shortly after the Aztecs put Air Force in the bonus as well. In total, the teams combined for 19 fouls

and 32 free throws in the quarter. The Aztecs struggled from the field, shooting just 3-for-17, but went 13-for-17 from the line in the quarter while the Falcons went 10-15.

Air Force hit a three-pointer on their first possession of the fourth quarter to take a four point lead. The Aztecs scored the next six points to retake the lead and they never trailed again. A Kaelin Immel three cut the lead to 62-60 with 4:34 remaining, but Najé Murray responded with a three of her own to push the lead back to five and the Falcons would score just one more point.

The win snaps a four game losing streak for the Aztecs and gives them their first Mountain West victory of the year.

The Aztecs set season-highs for free throws made and attempted (26-37).

Mallory Adams tied her career-high with rebounds, her sixth time with 10 or more rebounds this season.

Najé Murray had a season-high 23 points, her second time scoring 20 point and her 11th time scoring in double-digits this season.

The Aztecs' next game is at New Mexico Wednesday evening at 6:00 p.m.