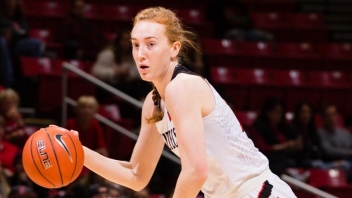 January 16, 2019 (Albuquerque) - The San Diego State women’s basketball team rallied back from a 19-point deficit, but fell just short at New Mexico Wednesday evening, losing 70-62. The Aztecs tied the game with 3:25 left, but then saw the Lobos finished the contest on an 8-0 run to seal the victory.

Najé Murray overcame a slow start to finish with a team-high 17 points. Zayn Dornstauder set career-highs with 13 points, eight rebounds and five blocks in 29 minutes. Sophia Ramos struggled from the field (3-13), but still had 11 points and seven assists. Téa Adams had 10 points and five rebounds.

The Aztecs struggled out of the gate and missed their first seven shots and turned the ball over five times in the first five minutes and quickly found themselves down 9-0 to start the game. Thy were able to pull within six points, but the Lobos ended the quarter on a 6-1 run to take a 24-11 lead. New Mexico’s Aisia Robertson finished the opening stanza with nine points, four rebounds, two blocks and two steals.

The Lobos cooled off in the second quarter, but the Aztecs still couldn’t find a rhythm on offense despite cutting down on their turnovers. Their top two scorers, Sophia Ramos and Najé Murray were a combined 1-for-14 in the first half. Zayn Dornstauder picked up the slack on offense and finished the first half with eight points and four rebounds, while Mallory Adams grabbed nine boards in the opening 20 minutes.

The Aztecs have faced big halftime deficits in the past and always find a way back in the game. It was no different Wednesday evening as they came back from a 19-point deficit. Najé Murray hit a three and then made a nice fingeroll in the lane to kick off a 13-5 Aztec run. Murray finished the quarter with nine points, but the Aztecs still trailed by 11 entering the final frame.

At the point, New Mexico called a timeout and switched to a zone defense and the Aztecs wouldn’t score again and the Lobos finished on an 8-0 run to escape with the victory.

The Aztecs held New Mexico to 30 percent shooting from the field in the second half, but SDSU shot just 33 percent for the game.

The Aztecs had one less turnover than the Lobos, but New Mexico scored 15 points off SDSU turnovers while the Aztecs only had four.

The Aztecs have a bye this Saturday and will return to action next Wednesday when they host Fresno State at 6:00 p.m.