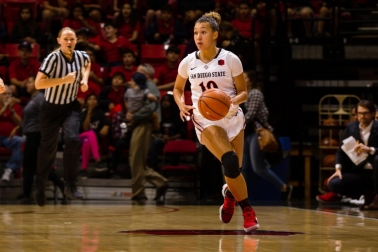 November 2, 2018 (San Diego) - The Aztec women’s basketball team knocked off Biola 63-53 in an exhibition contest at Viejas Arena Friday evening. After falling behind by double-digits in the first quarter, the Aztecs used a 15-2 run in the third quarter to take the lead and then held off the Eagles down the stretch.

Téa Adams led all scorers with 18 points while Najé Murray and freshman Mallory Adams each had a double-double. Murray poured in 15 points and grabbed 10 rebounds and Mallory Adams hauled in 16 rebounds to go with 12 points.

The Aztecs started slow and missed all their three-point attempts (6) and free-throws (5) in the first quarter, allowing Biola to take a 17-6 lead.

SDSU started to heat up in the second quarter, pouring in 24 points in the quarter while not committing any turnovers. The Adams duo – sophomore Téa and freshman Mallory, combined to score 17 of the Aztecs’ 30 first half points, but the Eagles held a 35-30 lead at the halftime break.

The Aztecs went on a 15-2 run in the third quarter to take a 45-40 lead, their first of the game. Great ball movement fueled their run; all six of their third quarter field goals were set up by an assist.

Once the Aztecs took the lead, they never relinquished it. Down the stretch, they held Biola without a field goal for a five minute span. Despite only scoring three field goals in the fourth quarter, SDSU iced the game with ten free-throws.

The Aztecs outrebounded the Eagles 53-36 and had 20 second chance points while Biola only had two.

The Aztecs have won their last 13 exhibition games.

Since this was an exhibition game, official stats do not count. However, if they did, this would be the first time two Aztecs recorded a double-double since November 14, 2014 when Cheyenne Greenhouse and Erimma Amarika accomplished the feat.

The Aztecs host Hawai’i for their regular season opener next Friday at 11:00 a.m.