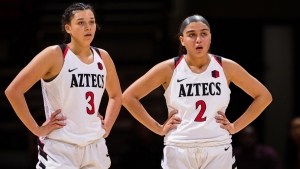 December 21, 2018 (San Diego) - The Aztec women’s basketball team (5-6) lost to UC Santa Barbara 63-58 Friday afternoon in their final non-conference game of the season. SDSU shot 48 percent from the field compared to the Gauchos’ 40 percent clip but couldn’t overcome a slow start which found themselves down 18 points in the first half.

Mallory Adams led the Aztecs with 17 points, a new career-high for her, on 8-for-14 shooting. She also had a team-high five rebounds. Sophia Ramos chipped in 11 points with four steals.

The Gauchos were led by Coco Miller who poured in a career-high 29 points and knocked down six three-pointers.

For the second straight game, the Aztecs started out slow. The Gauchos made five of their first seven shots and began the game on a 12-0 run. UCSB also had a 9-0 run in the first quarter and at one point led by 18 points (23-5). The Aztecs were outrebounded 14-4 in the opening quarter and managed to bring in just one defensive rebound.

In the second quarter, the Aztecs started to heat up and held UCSB to three field goals. A 14-2 SDSU run cut the lead to 29-27 UCSB, but the Gauchos hit a three in the final minute and took a 32-27 lead in to the halftime break. UCSB’s Coco Miller had 17 points in the first half.

UCSB went on an 8-1 run to start the second half to push their lead back to double-digits. SDSU shot over 50 percent in the third quarter and closed the gap to nine points as they entered the fourth quarter.

An 8-0 Aztec run pulled them within one point (51-50), but UCSB immediately responded with an 8-1 run of their own to put the game out of reach.

The Aztecs shot 48 percent from the field in the game and 58 percent in the second half but hit just two three-pointers and were outrebounded 35-23, their lowest rebound total of the season.

The Aztecs -12 rebounding margin was their worst of the year. They had just four rebounds in the first quarter and just one defensive rebound.

Nine Aztecs scored in the game.