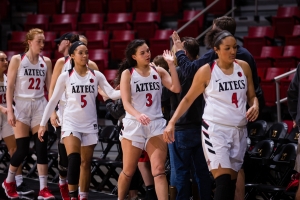 January 9, 2019 (Laramie, Wyo.) - The San Diego State women’s basketball team fell at Wyoming 87-45 Wednesday evening. The Cowgirls shot 44 percent from three and outscored the Aztecs 28-12 in the second quarter and maintained a double-digit lead for the entire second half.

The Aztecs, who had struggled in the first quarter their past three games, held a two point lead midway through the first quarter only to see the Cowgirls go on an 9-0 run. The Aztecs trailed 18-12 at the end of the first quarter, but Wyoming scored the first nine points of the second quarter and made their first eight shots and quickly pushed their lead to double-digits.

Wyoming outscored San Diego State 28-12 in the second quarter and made 11 of their 15 shots. They committed just one turnover in the first half and took a 46-24 lead in to the halftime break. Najé Murray led the Aztecs with seven first half points.

The Aztecs scored the first four points of the second half, but then Wyoming scored 10 unanswered points in a two minute span to push their lead to 56-28. They would lead by at least 20 points for the remainder of the game.

Wyoming had three players in double-digits and were led by Karla Erjavec’s 17 points.

The Aztecs had three assists, a season-low.

The Aztecs return home to host Air Force this Saturday at 1:00 p.m. The game will be streamed on the Mountain West Network.