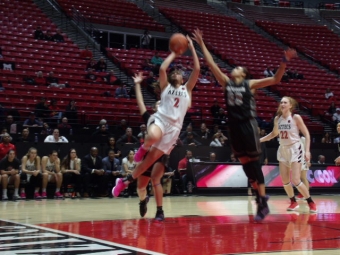 SDSU will play Air Force on Sunday at 4:30 p.m.
Story and photos by Liz Alper
March 7, 2019 (San Diego) - In the last regular season matchup, SDSU women’s basketball faced Nevada on Senior Night, trying to protect their 7-7 home record and get the #7 seed in the Mountain West Tournament that starts on Sunday. 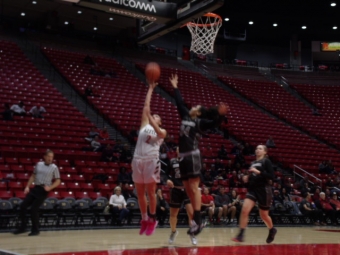 The Aztecs started the game well, playing good defense and getting good looks on offense, but still trailed early.  Wolf Pack junior Kristin Dearth hit a go-ahead two, but sophomore Najé Murray didn’t like that and hit a huge three to put the Aztecs ahead, putting her at #3 in the Aztec record books for three pointers in a season.  The Aztecs went back and forth with the Wolf Pack’s top scorer, senior Terae Briggs, but in the end, sophomore Te’a Adams made her own rebound and SDSU led 20-19 after one, shooting 57 percent and Murray a perfect 3-for-3 from the field.
A different Aztec team was on the court tonight; they were rebounding, shooting, hustling and playing tough.  In the second, they went up big with Murray hitting another three.  Murray hit a jumper then scored on a fast break to leave the Wolf Pack far behind at the half, leading 38-26.  Murray had 14 first half points and went 6-7 from the field. 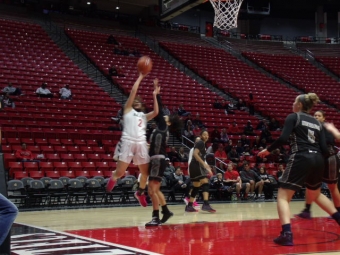 The Wolf Pack cut into the Aztecs’ lead in the third on an 11-0 run, Briggs leading the way, squaring off against Murray.  The Nevada senior from Montana quickly brought her point total to a whopping 21.  But after a long pause and a technical foul on Nevada, the Aztecs went on a 7-0 run that included a three from freshman Sophia Ramos to put SDSU up by 10 again.  The Aztecs led 53-47 after three.
The fourth quarter saw Monique Terry get on the board.  The junior from Texas drained a three on a nice kick out to extend the Aztecs’ lead.  Nevada senior Jade Redmon’s three brought the Pack to within four.  She hit a jumper and suddenly, the Aztecs were holding onto a slim 56-54 lead.  Dearth and Briggs combined to get the jump on the Aztecs with two layups and a free throw that put the Pack on top for the first time since the first quarter.  But none other than Sophia Ramos saved the day with a layup tying the game again.  Two free throws gave the Pack the lead again, but  Murray, ever so clutch, drilled a monster three to put the Aztecs up by one.  The red and black stayed tough, including a clutch block from redshirt junior Zayn Dornstauder, who was rewarded with two free throws for her efforts, and secured the #7 seed in exciting fashion, winning 64-61.  Murray finished with 21 points. 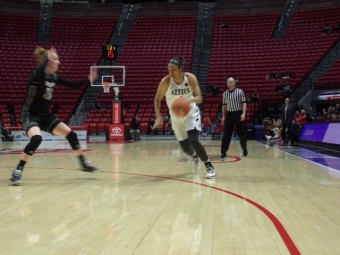 UP NEXT
The Mountain West tournament begins on Sunday in Las Vegas.  The Aztecs will play the #10 seed.
Like our SDSU sports coverage?  Donate to help support coverage of SDSU sports throughout the school year!
Check out our sports section for more sports stories!
Follow @ECMagSports on Twitter for live sports coverage and in-game updates!
Box 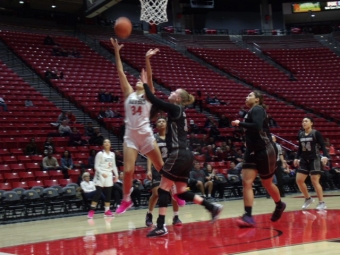 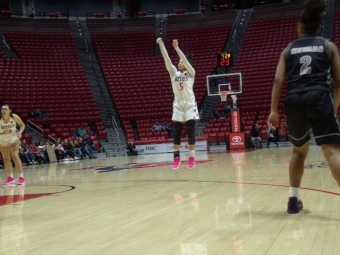 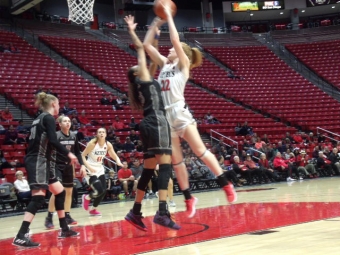 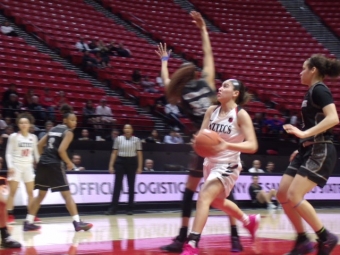