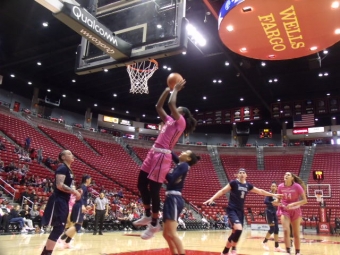 February 10, 2018 (San Diego) - After a heartbreaker Wednesday afternoon against Fresno State, the lady Aztecs took to Steve Fisher Court again this afternoon to try again in a matinee against Nevada in the “Pink Game” for Play4Kay Day at Viejas Arena.  The lady Wolf Pack are a vastly different team than the Bulldogs; seventh in the Mountain West and in a slump; 11-11 overall and 4-7 in league. 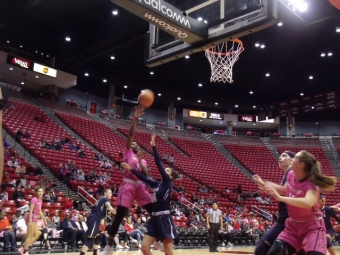 Senior Teige Zeller scored the first two points for the Wolf Pack on two free throws, but she was no match for The Freshman.  Najé Murray bit back with a smooth three to put the Aztecs in front.  Senior McKynzie Fort followed with a layup, but the Aztecs seniors rained threes to silence the Wolf Pack; Geena Gomez and Khalia Lark drained from downtown and the Aztecs, greatly improved from their heartbreak on Wednesday, led 20-14 after one quarter.  Murray led the way with six points.

After a strong start to the second quarter by the Aztecs, Nevada quickly gained momentum back, ending the half within one of the Aztecs, who started to get some pep back, but still went to the locker room up 30-29. 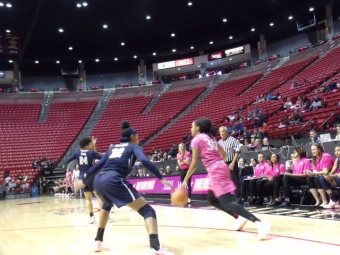 The struggles continued in the third.  Even though Lark kept the Aztecs afloat with a three, the Wolf Pack stayed sharp, drawing fouls and and-ones to climb back on top.  But they didn’t count on McKynzie Fort. The senior put the Aztecs on a 4-0 run with a fast break and a layup to give SDSU the lead again.  Fort quickly reached 10 points.  But then Jade Redmon stole the show.  The Nevada junior tied the game on a free throw and then scored on a fast break to put the Pack back on top.  They led 49-46 after three quarters.

Gomez was done with the Aztecs’ poor effort and opened the fourth quarter with a huge game-tying three.  When Nevada tied the game, she hit another to give the Aztecs the lead for the first time since the start of the third quarter.  When Nevada tied it up again, she hit another.  Basically, Geena Gomez was there when no one else was.  And when she wanted a break, freshman Te’a Adams took over, reaching six points on cute layups, while Gomez reached 16.  Despite all of this, Nevada still caught up and took a one-point lead, which Gomez of course easily erased.  The Aztecs held on and increased their lead with free throws to survive and come away with a 75-72 win.  Gomez finished with 18 points, Fort with 15 and Murray with 11. 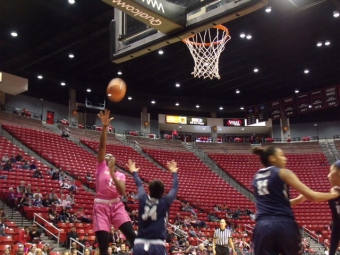 “Very happy, we deserve it,” Gomez said after the game.  “It was nice to actually put 40 minutes all together to get a win.”

"This is a big thing for us.  This is one of my favorite games," head coach Stacie Terry said about Play4Kay Day, which honors former North Carolina State women's basketball coach Kay Yow, who passed away from breast cancer in 2009. "my pre-game speech was all about that:  honoring the people that don't have the opportunity to fight or that are continuing to fight...and to honor...those people affected by cancer by coming out here and giving our best effort and fighting to the end and I felt like they did that, so this is just a great opportunity for us to bring more awareness to this terrible disease and do what we can to fundraise so we can hopefully find a cure.

"They showed a lot of grit throughout the game.  A lot of fight.  It wasn't a perfect game; we made a lot of mistakes, but I thought that they played hard and what we were able to do tonight was finish out the fourth quarter.  That has been the theme for the past week because we lost these last couple games with a lead in the third or an opportunity to win, so I was really proud of the way they were able to finish, making adjustments on the fly, getting to the rim and making baskets.  I thought the fourth quarter, we did not settle for jump shots, we were determined to get to the rim...I thought they just executed well and that's what today was about was execution on the stretch...getting stops down the stretch was huge for us...we did a better job as a staff maintaining and controlling the fourth quarter, calling those timeouts so the game didn't get away from us, learning to play with a lead and then sometimes having to play from behind.  So a lot of learning went on in that fourth quarter, so I'm hoping that games like this are gonna help us play our best basketball in March."

Another road trip awaits the lady Aztecs.  First up is a Valentine’s Day showdown in Laramie.  Tipoff against Wyoming is set for 5:30 p.m.