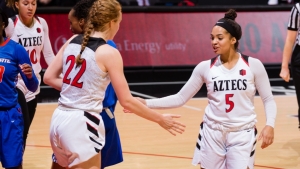 Tea Adams had a team-high 15 points

The Bulldogs’ Candice White hit a difficult three-pointer with 5.8 seconds left to bring Fresno State within one point. The Bulldogs then fouled Mallory Adams who missed both free throws to set up one more chance for Fresno State. After advancing the ball, they inbounded to Maddi Utti, who faked a hand-off to White and then drove baseline, stopped and elevated for an eight foot jumper that rimmed out as the buzzer went off.

Téa Adams had a game-high 15 points including two clutch free throws with 15 seconds left to put SDSU up four. Mallory Adams had 13 points and eight rebounds. Baylee Vanderdoes had a season-high 11 rebounds.

Fresno State started the game up 5-0 but the Aztecs then went on a 12-2 run and held the lead for the remainder of the game. SDSU shot 50 percent in the opening quarter and forced the Bulldogs to miss nine of their last 11 shots of the quarter.

The Aztecs scored the first six points of the second quarter and opened up a double-digit lead (22-12). The Bulldogs quickly responded with a 6-0, prompting Coach Terry to call a timeout. From that point, both teams struggled offensively in the closing minutes of the first half and SDSU took a 27-20 lead at the halftime break. The Aztecs held the Bulldogs to 28 percent shooting in the first half.

The Bulldogs shot 50 percent in the third quarter, but the Aztecs were able to maintain their seven point lead entering the fourth quarter.

The Aztecs led by as much as 11 points with 5:39 remaining only to see their lead slowly dwindle. Fresno State scored 11 of the next 14 points to close the gap to three points with 2:06 left. A Sophia Ramos lay-up pushed the lead back to five with 1:13 left, but the Bulldogs hit a put back three on a kick out following an offensive rebound to bring the score to 57-55 with 36 seconds remaining.

The Bulldogs were instructed not to foul but did anyway with 15 seconds remaining, putting Téa Adams on the line, who sunk both to put SDSU up four. On the other end, Candice White hit an off-balance step-through three with 5.8 seconds remaining. The Bulldogs then fouled Mallory Adams, who missed both to set up Fresno State’s final play.

The Aztecs outrebounded the Bulldogs 44-35 and held Fresno State to 24 percent from three (6-25).

San Diego State sits in eighth place and will secure the No. 7 seed in the Mountain West tournament with a win vs. Nevada on Thursday evening.

SDSU won the rebounding battle 44-35 This is the second straight game the Aztecs have had at a +9 edge in rebounds.

Baylee Vanderdoes had a season-high 11 rebounds.

The Aztecs wrap up the regular season on Thursday when they host Nevada at 5:30 p.m. Before the game, SDSU will honor its three seniors: Arantxa Gómez Ferrer, Loli Gomez and Monica Merkovsky.