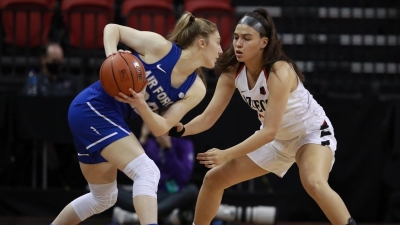 SDSU held a four-point lead with 4:07 remaining and then saw Air Force finish the game on a 15-3 run.

In a game that featured 10 lead changes and five ties, both teams struggled on offense. The Aztecs shot 28 percent from the floor but were able to hold the Falcons to 31 percent shooting.

The Aztecs were led by Tea Adams and Sophia Ramos who each finished with 13 points. Mercedes Staples and Flo Vinerte each had eight rebounds.

After a slow start, SDSU heated up in the second quarter and finished the first half on an 11-1 run to take a 23-18 lead at the break.

Air Force responded in the third with a 10-0 run to take a 37-33 lead. Both teams went cold from the field to start the fourth quarter, combining to shoot 2-for-12 to start the final quarter.

SDSU grabbed a four-point lead midway through the fourth but then Air Force reeled off 11 straight points. The Aztecs cut the deficit to four after a Sophia Ramos three with 33 seconds left but that would be as close as they would get.

Air Force was paced by Kaelin Immel and Riley Snyder who scored 17 and 16 points respectively.

The Aztecs were outscored 38-25 in the second half.

This was just the third time in 15 Mountain West Tournament games that SDSU has lost as the higher seed.