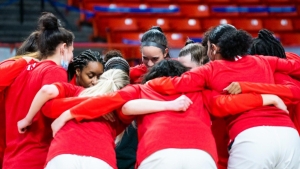 The Aztecs struggled from the opening tip, committing seven turnovers in the first five minutes. SDSU scored the first bucket, but then saw Boise State go on a 16-2 run.

Ramos was the offense in the first half, scoring 14 of the Aztecs’ 21 first half points and SDSU trailed 36-21 at the break.

The Broncos stayed hot in the third quarter, going on a stretch where they made nine of 10 field goals and led by double-digits for the entire second half.

Boise State was led by Jade Loville’s 21 points. Mallory McGwire had 18 points on 8-for-10 shooting and Alexis Mark (14) and Kimore Sykes (11) also had double-digits.

The Broncos shot 51 percent from the floor.

Sophia Ramos finished with 23 points, her 15th career game with at least 20 points.

The Aztecs wrap up their regular season on Thursday when they host Utah State at 1 p.m. Regardless of Thursday’s outcome, the Aztecs will play Air Force in the first round of the Mountain West tournament (Sunday, March 7 at 2 p.m.) in the No. 8 vs No. 9 seed game.