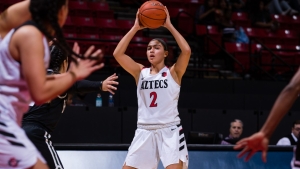 The Aztecs shot just 27 percent from the field and failed to make a three-pointer. They were led by Téa Adams’ 10 points. Mallory Adams chipped in nine and Sophia Ramos had eight.

Téa Adams provided the offense for the Aztecs early on, scoring the team’s first six points and all ten of her points in the first half.

The Aztecs never held a lead in the game but kept it close for the majority of the first frame. A 7-0 Bronco run gave Santa Clara a 15-8 lead, but the Aztecs answered back with a 6-0 run of their own.

The Aztecs forced eight first half turnovers to keep the score close until Santa Clara went on an 11-3 run to close out the second quarter. The Broncos had 11 assists on their 13 first half field goals.

The Aztecs’ offensive foes continued in the third quarter where they had just one field goal and five turnovers. They did have seven made free-throws in the quarter, but the Broncos were able to extend their lead to 48-30.

SDSU outscored the Broncos 13-12 in the fourth quarter and didn’t allow Santa Clara to make a field goal in the final 5:37.

The Broncos had a balanced scoring attack with five players scoring between eight and 10 points.

SDSU outrebounded the Broncos 36-34, including a 15-9 advantage on the offensive glass.

The Aztecs held the Broncos to 20 percent shooting (4-for-20) from behind the arc. However, the Aztecs did not make a three-pointer themselves.

The Aztecs continue their road trip and play at Cal State Fullerton Thursday evening at 7:00 p.m. The game will be streamed on BigWest.tv and Chris Ello will provide commentary courtside with an audio-only broadcast available on GoAztecs.com.