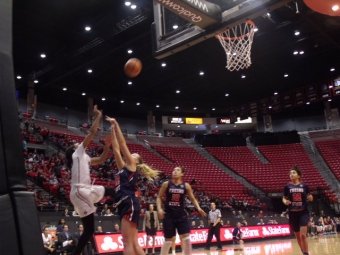 February 7, 2018 (San Diego) - In a special Wednesday matinee, San Diego State women’s basketball took to Steve Fisher Court to take on the Bulldogs of Fresno State.  The red and black lost to the Dawgs in Fresno on January 17, 64-53.  The Bulldogs are a tough customer, ranking third in the Mountain West. 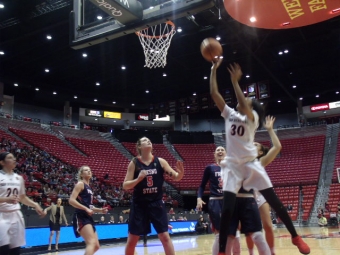 After a deadlocked three minutes, junior Breanne Knishka scored the first two points for Fresno State, but from then on, it became Najé Murray vs. the Bulldogs.  The freshman drained a three from downtown to put the Aztecs on the board and keep  the fed and black within one.  Senior Geena Gomez quickly took over with a three of her own that gave the Aztecs the lead 13-12 after one.

The Aztecs broke away big time in the second quarter, going on a 6-0 run to open the frame.  The Bulldogs eventually caught up, however and tied the game.  But Gomez pulled through for the Aztecs again with a late three to regain the lead.  Fresno State tailed close behind, not letting the Aztecs enter the locker room at the half without a slim, one-point, 24-23 lead. 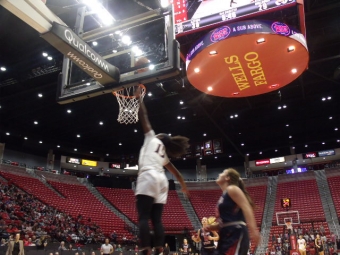 Gomez and senior McKynzie Fort continued to be the Aztecs’ saving grace in the second half, Gomez putting up a couple of crucial threes and Fort scoring on a nice breakaway bucket.  Senior Cheyenne Greenhouse helped out a little too and the Aztecs enjoyed a little bit of a cushion after three quarters, 43-39.

Greenhouse, usually an understudy in the Aztecs’ cast of characters, absolutely dominated the fourth quarter, reaching 12 points.  Freshman Te’a Adams trailed close behind, hitting 10, while Gomez led the pack with 14.  But trouble was brewing.  Bulldogs freshman phenom Maddi Utti singlehandedly dragged the Dawgs back into it with a three that brought FS within one and a jumper to give them the one-point lead.  From then on, it was an avalanche of mistakes; balls going out of bounds, missed opportunities.  It resulted in another Aztecs loss in what should have been at least a narrow victory.  The Aztecs take the L 66-60 and fall to 9-13 and 3-8 in conference play. 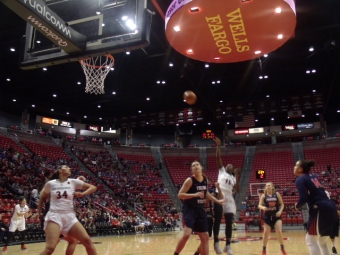 “... I love that the community has got on board and interested in what we’re trying to do and build here,” head coach Stacie Terry said of the huge Field Day crowd at Viejas Arena. Her daughter attends Eastlake Elementary School and her class was in attendance at today’s game.  “...My personal goal this year is to make sure that we’ve reached out to the community a little more and got more involved and I think that’s paying off in our attendance…the crowd really lifted us in the first couple of quarters...that’s the kind of crowd we would love to play for every single game…”

“We’re gonna focus more on ending games.We’re in games for three quarters the majority of the time and we need to do a better job of finishing up the fourth.  Teaching them that they are good enough, or letting them know that they’re good enough and showing them how close they are is gonna be my task for the next couple of weeks until we get to the tournament...I need to do a better job of making sure that I manage the fourth quarter a little better, to help them get themselves out of holes and do a better job there...we’re playing good basketball for about 32 minutes, sometimes 35 minutes and then it kind of just falls apart in the last quarter, so we’re gonna do a better job there.” 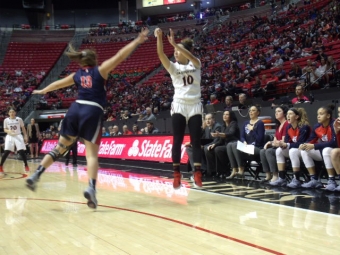 The Aztecs will stay at home to face Nevada on Saturday.  Tipoff is set for 1:00 p.m.