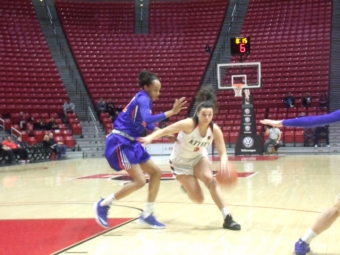 January 5, 2019 (San Diego) - ECM Sports finally made it to a basketball game on the Mesa and the lady Aztecs were ready to start Mountain West conference play today against Boise State.  They’re barely staying afloat with a 5-6 record overall. 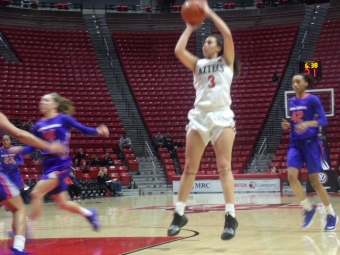 The Aztecs fell behind quickly and even when they got some momentum on offense, they were no match for Boise State’s tough, athletic defense.  The Adams girls—freshman Mallory and sophomore Téa—combined for seven points to open the game.  The Aztecs crawled their way back through free throws and played a good game of catch-up towards the end, when sophomore Najé Murray intercepted a pass and tossed it to Spanish senior Arantxa Gomez-Ferrer for the layup.  The Aztecs trailed 22-14 after one.

The Aztecs held the Broncos to just eight points in the second quarter, but still struggled offensively and had yet to make a three-pointer, despite stepping up their defensive rebounding.  Luckily (or maybe not), the Aztecs trailed by nine, 30-21, at the half. 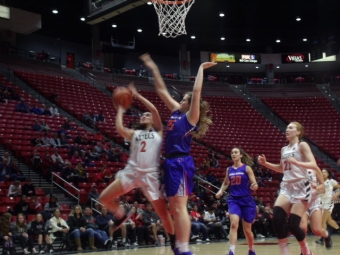 The third quarter proved to be just as difficult for the Aztecs, but Mallory Adams did get her fourth double double of the year, with 14 points and 10 rebounds.  But the third was a dismal quarter for the Aztecs and they trailed 51-41 at the end.

The fourth quarter saw the Aztecs get their first three of the game from Murray.  The Aztecs continued to struggle, but after a timeout with six minutes left, a new team took the floor, led by freshman Zayn Dornstauder and Mallory Adams, who had a career-high 20 points.  The freshmen led the Aztecs on a remarkable 7-0 run to get to within one.  But the Broncos responded with a 6-0 run.  The Aztecs kept it close, but a three from Dornstauder missed at the buzzer and the rally fell heartbreakingly short.  The Aztecs fell 69-66 and start conference play 0-1, falling to 5-7 overall.

Like our basketball coverage?  Help us cover high school and college basketball throughout the season by donating to East County Magazine Sports!