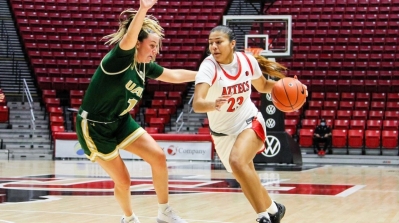 The Aztecs improve to 4-1

SDSU led for the majority of the game and then held off two UAB runs in the second half. The game was tied at 47 with 6:40 left and then the Aztecs went on a 6-0 run.

“It was a good defensive battle from both teams,” Head coach Stacie Terry-Hutson said after the game. “This is a team that is continuing to grow and we're going to get better as each game goes on. I thought this was a really gritty, tough defensive battle. I'm really proud of the effort that our kids displayed. We made plays when we needed to, and we got rebounds when we needed to.”

Asia Avinger led the Aztecs with 13 points, scoring 10 of them in the first half. Kim Villalobos scored all 10 of her points in the second half and brought down a team-high seven rebounds.

“Kim made huge plays today,” Terry-Hutson praised. “It started with her rebounding. That's where it was, she got to the offensive glass and got some easy putbacks. It was a reminder of what she's able to do for us because she was doing it all for us last year. She's getting her confidence back and playing as hard as she possibly can. I think that's going to boost her as we move forward.”

Avinger scored seven of SDSU’s first nine points and then the Aztecs took their first lead on an Alex Crain three to put them up 14-12. SDSU would hold the lead until the third quarter.

SDSU led by as much as seven in the second quarter and by five at the halftime break.

A UAB 6-0 run early in the third quarter gave them a 37-36 lead. Once the game was tied at 47, SDSU held the Blazers scoreless for the next four minutes while forcing three turnovers.

UAB got within two points with 58 seconds left after SDSU was called for a flagrant foul, but the Aztecs got enough stops and rebounds down the stretch to earn the victory.

The Blazers were led by Zakyia Weathersby who had 12 points, 11 rebounds and three blocks.

The Aztecs held UAB to eight field goals on 26.7 percent shooting in the second half.

The Aztecs play Ole Miss at Cal Friday at 3 p.m.