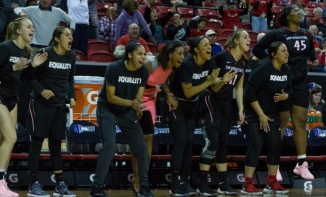 Aztecs will play all 11 non-conference games in California

July 19, 2018 (San Diego) - San Diego State women’s basketball head coach Stacie Terry has announced the Aztecs’ 2018-19 non-conference schedule. The slate features 11 games, six of which are at home, and is highlighted by games against Arizona and TCU.

A year after traveling all the way to the Bahamas for a Thanksgiving tournament, the Aztecs entire 2018 non-conference schedule consists of games in California.

After an exhibition game against Biola on November 2, the Aztecs’ 2018-19 season officially gets underway November 9th when they host Hawaii, the first of five games against Big West teams.

The Aztecs will hit the road the following week, playing at Santa Clara (Nov. 13) and then at Cal State Fullerton (Nov. 15). SDSU hosted both teams last season, earning a 59-58 win against Fullerton, but falling to Santa Clara.

SDSU will then play its next five games in San Diego. On November 18, they will host Incarnate Word and then will be hosting a Thanksgiving tournament, which will feature BYU, TCU and Cal Baptist. On November 23, the day after Thanksgiving, SDSU takes on Cal Baptist. The following day, the Aztecs will play TCU, who advanced to the WNIT Final Four last year and won 23 games, their most in ten years.

The following week, the Aztecs will have their annual game against the University of San Diego (Nov. 28). This year, the game will be at USD’s Jenny Craig Pavilion. The Aztecs beat the Toreros 77-76 last season on a McKynzie Fort driving lay-in with eight seconds left.

On Sunday, December 2, the Aztecs will welcome the University of Arizona of the Pac-12, who they beat 78-67 on the road a year ago.

The final three non-conference games will be against Big West foes. First a pair of road games at UC Irvine (Dec. 7) and at CSUN (Dec. 10). CSUN won the 2018 Big West Tournament and is coming off their third NCAA Tournament appearance in the past five years.

After an 11-day layoff, the Aztecs will close out the non-conference season with a home game against UC Santa Barbara.