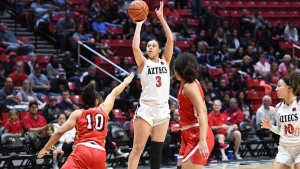 Mallory Adams had 15 points and 9 rebounds

Mallory Adams once again paced the Aztecs with 15 points and had nine rebounds. Sophia Ramos had 12 points and seven rebounds and Téa Adams chipped in 10 points.

The Aztecs got off to a slow start. They missed their first six shots and committed four turnovers in the first four minutes and found themselves down 8-0 and 11-2 to start the game.

SDSU shot 50 percent in the second quarter and went on a 6-0 run midway through the second quarter to pull within one point. The Rebels responded to score the next five points, but the Aztecs closed the half on a 10-3 run. Téa Adams hit a tough shot at the buzzer to give SDSU their first lead of the game, 26-25, heading into the halftime break.

Mallory Adams knocked down a contested shot in the lane on the Aztecs’ first second half possession to put SDSU up three, but then UNLV’s Jordyn Bell hit back-to-back threes. The Rebels would go up by as much as six points in the third quarter, however, SDSU closed the quarter on a 10-3 run and took a one point lead into the final quarter.

SDSU was up 44-41 with 7:41 remaining and then Najé Murray was whistled for a personal foul and technical foul. From that point on, UNLV outscored the Aztecs 21-5. The Rebels went to the line 18 times in the fourth quarter and then hit 12 free throws.

UNLV, who entered the game tenth in the conference in three-point percentage, were 8-for-16 from long range.

Mallory Adams has scored in double-digits in nine of the Aztecs’ last 10 games.