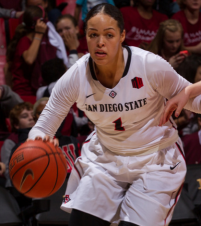 January 25, 2017 (San Diego) - San Diego State women’s basketball got within two with just five seconds on the clock but was unable to mount a comeback against Mountain West foe Air Force, falling to the Falcons, 62-59, on Wednesday night at Viejas Arena.

The win, Air Force’s first in conference play, improves its record to 1-7 against MW opponents and 3-15 overall. SDSU, meanwhile, moves to 3-4 versus MW teams and is now 8-10 on the year.

Khalia Lark was the Aztecs’ best player during the night, leading her team with a game-high 18 points to go alongside team highs of seven rebounds and four steals. McKynzie Fort put up 16 points and matched a career high with two blocks. Kymberly Ellison corralled a career-best six boards to go alongside eight points.

With three minutes on the clock and the Scarlet and Black trailing, 57-45, Fort made good on a 3-point play to cut Air Force’s lead to 57-48. She knocked down another free throw at 2:23 and Greenhouse cashed in on a pair of her own at 2:03. As 1:35 remained, Lexy Thorderson drilled a three, putting the game within three points at 57-54.

With 31 seconds to go, Air Force’s Mariah Forde got a jumper for the 59-54 advantage. Each team got two free throws and, with just five ticks on the clock, Lark nailed a long ball for the 61-59 score. But SDSU was unable to get anything else past Air Force and, with a made free shot by the Falcons, the final score was 62-59.

The first half was an offensive struggle for both teams, who were tied 25-25 at the intermission. For the first 20 minutes, San Diego State shot 39.3 percent (11-for-28) percent, while Air Force shot just 30 percent (9-for-30). Each team made just one three on a combined 13 attempts.

In the third quarter, the Falcons started to show signs of improvement, out-scoring the Aztecs, 18-15, in the frame to take a 43-40 lead after 30 minutes of play before pulling away in the early fourth quarter.

The Aztecs are back on the road this weekend with a 2 p.m. (MT) game at Colorado State on Saturday, Jan. 28.