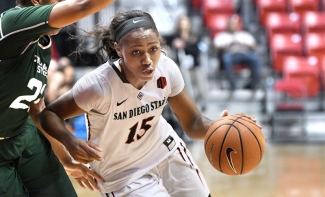 January 17, 2018 (Fresno) - Despite a 20-point effort from senior McKynzie Fort, the San Diego State women’s basketball team came up on the short end of a 64-53 decision Wednesday night in a Mountain West game at Save Mart Center.

With the loss, the Aztecs drop their second straight and fourth in their last five games, slipping to 8-9 on the year and 2-4 in conference play,  while the Bulldogs even their record at 9-9 overall and move to 4-3 in MW action.

The two sides battled through eight lead changes and one tie during the first half, with Fresno State nursing a slim 27-25 advantage at intermission.

However, SDSU’s second-half shooting woes surfaced once again, as the Scarlet and Black connected on just 31.3 percent of its field-goal attempts (10-32) over the final two quarters, including a 1-for-9 clip (11.1 percent) from beyond the three-point arc.

On the flip side, Fresno State drained 50 percent of its attempts (15-30) from the floor during that span while converting five free throws in the fourth quarter to help keep the Aztecs at bay.

The Aztecs limited the conference’s leading scorer Candice White to just seven points after the Bulldog guard entered the night with an average of 18.6 points per game. However, Kristina Cavey picked up the slack for the hosts, finishing with a game-high 22 points on 9-of-12 shooting, while Maddi Utti chipped in 11 points of her own.

White led all players with nine rebounds, helping Fresno State maintain a slight 38-36 edge on the boards. Despite the narrow margin, the Bulldogs still dominated the middle, outscoring SDSU 42-24 in the paint while amassing 20 points on 17 Aztec turnovers.

SDSU led by four points in the first quarter, as a Fort layup put the visitors up 12-8 with 2:27 left in the period.

Fresno State regained the upper hand in the second stanza, building a 23-17 bulge on White’s jumper at the six minute mark. The Aztecs kept things close, however, trimming the deficit to two at 27-25 following a pair of Fort foul shots with 36 seconds to go.

The Aztecs took their last lead of the game at 30-29 with two-and-half minutes elapsed in the third quarter on another Fort jumper, but the Bulldogs vaulted in front for good after a Breanne Knishka triple and a layup by Aly Gamez on the next two possessions.

Fresno State stretched the margin to 14 later in the fourth period, as Cavey’s layup with 5:21 left provided the host school a seemingly comfortable 57-43 advantage.

SDSU flashed its resiliency with a 10-2 run over the next 4:25, capped by a Fort free throw, to pull the Aztecs to within 59-53. However, just 56 seconds remained and the Scarlet and Black could draw no closer.

San Diego State returns home for its next encounter on Saturday, Jan. 20 when it plays host to New Mexico at 1 p.m. PT.