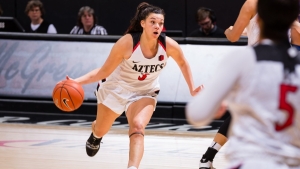 Mallory Adams had 19 points and 10 rebounds

January 26, 2019 (Las Vegas) - The San Diego State women’s basketball team suffered a 71-57 loss at UNLV Saturday afternoon. The Aztecs fell behind by double-digits in the first quarter and never recovered after struggling with turnovers and cold outside-shooting.

Mallory Adams led the Aztecs with 19 points and ten rebounds, her fifth double-double of the year. She had 17 points and eight rebounds in the second half. Sophia Ramos and Najé Murray both had 14 points and seven rebounds. Murray also had five steals.

The Aztecs struggled out of the gate and UNLV made seven of their first eight shots and jumped out to a 13-2 lead. Sophia Ramos made three consecutive buckets and the Aztecs were able to cut the deficit to 16-10.

Following a transition three from Murray the Aztecs were within two points (24-22), but the Lady Rebels responded with a 10-2 run as the turnovers plagued SDSU.

The Aztecs were able to force nine first half turnovers but committed 12 themselves and shot 33 percent and found themselves down 34-26 at the halftime break. Sophia Ramos led all scorers with 10 first half points.

The Rebels scored the first four points in the third quarter to go up by 12, their largest lead of the game. SDSU reeled off an 8-0 run to bring the score to 43-39 UNLV with 4:01 left in the third.

The Aztecs trailed by seven entering the fourth quarter but then had a stretch of 4:36 without a field goal as UNLV began to pull away. SDSU ended up just 3-for-15 from the field in the quarter.

The Aztecs was 3-for-17 from three Saturday.

Sophia Ramos and Najé Murray led the Aztecs in scoring. They both have scored 10 or more points in 14 of SDSU’s 17 games.