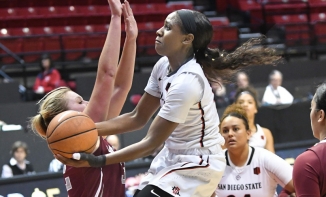 In addition, SDSU outscored the Cowgirls (7-5, 0-1 MW) in the paint by a 32-19 margin and tallied 20 points off 16 turnovers to help snap a two-game losing skid. The Aztecs also made it the free-throw line 14 times more than Wyoming, connecting on 19 of 25 foul shots, compared to the visitors’ 10-for-11 clip.

Besides Fort’s performance, which featured a team-best three steals, SDSU received 10 points from fellow classmate Khalia Lark, while senior Geena Gomez and freshman Te’a Adams finished with nine points apiece. Not to be outdone, the Scarlet and Black cause was advanced by sophomore Baylee Vanderdoes, who led all players with nine rebounds, including seven on the defensive glass.

Wyoming was unable to capitalize on the Aztecs’ early offensive woes, draining just 4 of their first 16 attempts from the floor to grab a precarious 10-6 lead at the end of the first period. The Cowgirls stretched their advantage to eight in the second stanza at 27-19 with 1:08 left before intermission.

However, SDSU scored the last eight points of the quarter, including a layup by Fort with five seconds on the clock, to give the hosts some much-needed momentum heading into the locker room.

The Aztecs continued their ascent after the break, uncorking a 10-2 blitz to build a 36-29 bulge with 4:24 remaining in the third period. Wyoming fought back with a 12-5 run of its own, capped by a Taylor Rusk triple, to knot the score at 41-41 with 47 seconds left in the frame.

Unfazed, SDSU countered with a three-ball from Lark on the ensuing possession to vault in front for good. The Aztecs fashioned a trio of nine-point leads in the fourth quarter, including a 62-53 spread with 55 seconds to go in regulation.

The Cowgirls made things interesting in the waning moments, utilizing a 9-2 spurt to narrow the gap to 64-62, punctuated by another Rusk triple. However, Cheyenne Greenhouse and Adams each sank two free throws in the remaining 15 seconds to provide for the final tally.

The Cowgirls shot just 28.6 percent in the third quarter (4-14), compared to the Aztecs’ 53.3 percent clip during that stretch (8-15), which enabled the Scarlet and Black to seize the upper hand.

San Diego State will head out on the road for the first time in conference action this season on Saturday, Dec. 30, when it travels to Utah State. Opening tip is set for 1 p.m. PT.