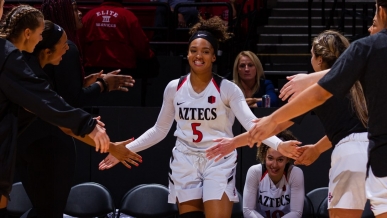 Four Aztecs had at least 15 points

Sophia Ramos also had a career-high 19 points on 8-for-13 shooting. Najé Murray had 17 points and Mallory Adams scored 16 points with 13 of them coming in the second half.

The Titans scored the game’s first basket, but then the Aztecs reeled off 13 straight points behind eight quick points from Najé Murray. After the Aztecs didn’t hit a single three-pointer at Santa Clara on Tuesday, Murray hit two in the game’s first three minutes. SDSU never trailed from that point.

Cal State Fullerton responded with a 9-2 run to cut the Aztecs’ lead to 15-11, but SDSU would push it back to seven points to take a 21-14 lead at the end of the first quarter. All 21 of the Aztecs’ first quarter points came from their starting backcourt. Sophia Ramos and Murray had eight points while Téa Adams had five.

The Titans would get as close as five points in the second quarter, but the Aztecs ended the half on a 6-0 run to open up a 36-26 lead at the halftime break. They turned Fullerton’s six first half turnovers to 10 points, while the Titans did not score any points off SDSU turnovers.

In the fourth quarter, every time the Titans made a run, the Aztecs had an answer and never relinquished their lead. The Titans got within four points, but then the Aztecs went on an 8-1 run punctuated by a Ramos three-pointer with 29 seconds left.

The Aztecs shot 51 percent from the field, outrebounded the Titans 39-34 and committed a season-low eight turnovers.

73 of the Aztecs’ 83 points came from underclassmen.

Baylee Vanderdoes had nine rebounds and seven in the first half. Entering the game, no Aztec had collected more than six rebounds in a game.

The Aztecs have now beaten Cal State Fullerton in their last nine meetings.

The Aztecs return home for their next three games. They host Incarnate Word (San Antonio, Texas) Sunday at 1:00 p.m.