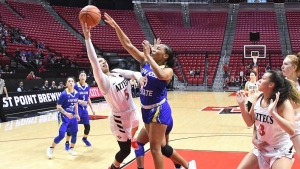 SDSU led by 17 points in the first quarter, but saw the Spartans take their first lead of the game with 16 seconds left after Analyss Benally banked in a three-pointer. On the other end, Téa Adams knifed through the lane and scooped up the game-winner off the glass with two seconds left to secure the nail-biting victory for the Aztecs.

“It was exciting,” Adams said after the game. “We were all pumped up. The game wasn’t supposed to come down to the wire, but we did what we had to do in the end. Coach said in the huddle that we had to execute, I had to make that bucket, and that’s what I tried to do.”

“We’ve been in so many tight games that I think the team is used to it and they don’t panic,” head coach Stacie Terry added. “This group never gives up and I’m so proud of them.”

Najé Murray had a team-high 16 points with a career-high nine assists and seven rebounds. Mallory Adams recorded her third straight double-double with 14 points and 13 rebounds. Sophia Ramos finished with 13 points, five rebounds and five assists and Téa Adams had 13 points including the game-winner. This is Adams’ second game-winner of the year. She had another one against Hawai’i in the season opener.

“Offensively, we came out on all cylinders,” Coach Terry said “I was proud of the way we started in the first quarter, kind of the reverse of what we normally do. Then we started to slow down, but the good thing about that is our defense got the stops that we needed.”

The Aztecs, who typically struggle in the first quarter, hit the ground running Saturday. They scored the game’s first seven points and opened up a 16-2 and 22-5 lead. They were using excellent ball movement to create good looks and had assists on seven of their first eight buckets with six players scoring in the opening quarter. SDSU had just one turnover in the first quarter and ten in the game and held a 26-15 lead after one, the most first quarter points they have had this season.

SDSU shot just 23 percent in the second quarter and scored just nine points as the Spartans started to cut into the Aztec lead. SDSU took a 35-30 lead into the halftime break, but the Spartans rallied to tie it up at 41-41 midway through the third quarter.

The Aztecs immediately responded and pushed their lead back to eight. They would have that same margin of lead with 2:57 left in the game, but a 7-0 Spartan run saw their lead evaporate. Téa Adams hit a jumper from the top of the key to push the lead back to three with 52 seconds left but SJSU scored a lay-up on the other end to cut the score to 66-65.

On the next possession, Sophia Ramos found Mallory Adams in the lane from the baseline. Adams was fouled and hit one free throw to put SDSU up two. SJSU’s Benally then banked a three in with 16 seconds left, which was the Spartans’ first lead of the day.

After a SDSU timeout advanced the ball, the Aztecs had the ball down one with 14 seconds left. Sophia Ramos sucked the defense in and found Adams who split two defenders, sidestepped another and scooped it off the glass for the game-winner.

“We’ve worked on that set so Téa was comfortable in that situation,” Coach Terry said. “If she didn’t have that, we had a backscreen for Najé coming to the top of the floor, so we had a couple options.”

“Najé played a great game and she always gets up for San Jose. She always does. I need to put a San Jose jersey on everybody we play because she always has great games against them, but I’m really proud of her. We get on Najé pretty good because she is so talented, and she can do so many positive things. For her to come out and defend, score, and share the ball like she did today, she really grew. I’m really proud of that kid.” – Head coach Stacie Terry on Najé Murray’s performance

The Aztecs only had ten turnovers, their fewest since their season opener against Hawai’i.

Mallory Adams had her third consecutive double-double and seventh of the year. She is now averaging a double-double in conference play.

Najé Murray had a career-high nine assists. This topped her previous best of eight which also happened against San José State (2-24-18). Murray also tied a career-high with seven rebounds.