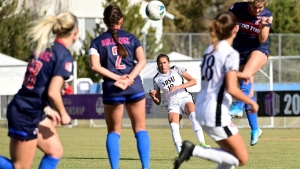 November 7, 2019 (Boise) - The San Diego State women’s soccer team and Fresno State Bulldogs put on a goal-scoring show midway through the first half of the first Mountain West Championship semifinal.  The teams combined to score five goals in just over 13 minutes with SDSU getting three of them in a 3-2 victory.

San Diego State (10-8-1) will play Boise State, which defeated New Mexico 6-0 in the second semifinal match, for the championship and the league’s automatic bid to the NCAA Tournament on Saturday at 12 p.m. MT.

The Bulldogs outshot SDSU 21-to-8, but in shots on goal the Aztecs made it much closer, 7-to-6.

Taylor Moorehead opened the scoring at the 27:08 mark.  Keeper Brooke Lisowski booted a ball that went nearly two-thirds of the way down the field.  Reminiscent of Rachelle Elve’s overtime game-winner against the same Fresno State team 13 days ago, Moorehead ran onto the ball and when the keeper charged off her line, she slotted it home of a 1-0 lead.  It was Moorehead’s fifth goal of the year and Lisowski’s second assist.

The lead lasted slightly less than four minutes.  Fresno State’s Melissa Ellis tied the game in the 31st minute on her first of two goals on the day.

Less than a minute after Ellis tied the game, San Diego State’s leading goal scorer, freshman Rachelle Elve put the Aztecs back in front.  Kiera Utush had the ball in the defensive zone and played it on the Rachel Speros who was just over the midfield line.  Speros eyed Elve who was beginning a run down the left sideline.  Speros placed the ball perfectly on the foot of Elve who had beaten her defender to the outside.  Elve took a touch, stopped on a dime letting the defender run past the ball, and then hammered a shot in to make it 2-1 San Diego State.  It was Elve’s team-leading seventh strike and Speros’ first assist of the year.

It took seven minutes for the Bulldogs to find the equalizer on Ellis’ second goal of the game.  On the play, Kylie Lucero was credited with an assist.

The final goal of the game can at the 40:11 mark.  Fresno State committed a foul just outside the 18.  Utush lined up and powered a 23-yard shot past the defensive line and into the upper right corner of the goal to give the Aztecs a 3-2 lead.  It was Utush’s third goal of the season and her first since the game at Miami (Fla) on Sept. 7.

In the first 45 minutes, the Aztecs produced five shots, put four of them on frame with three finding the back of the net.  Fresno State attempted 11 shots, placed five on goal and got two past Lisowski.

In the second half, SDSU was outshot 10-to-3 and each team put a pair on goal, but no goals were scored.  As the half continued the game got rougher and rougher.  There were 12 fouls called on the Aztecs and 10 on Fresno State.  The teams combined for seven yellow cards, including five in the final 45 minutes.

San Diego State’s offense was paced by two shots each from Elve and Malia Kaleiohi, who returned to action after missing the past two games.  Utush, Phoebe Lietch, Moorehead and Chloe Frisch produces single shots.  Lisowski made five saves to improve her record to 10-8-1.

Fresno State (9-7-4) saw its season come to an end with Elle Avery taking a game-high five shots.  Valentina Vivas, who played only the first half, gave up all three SDSU goals and took the loss.

SDSU advances to its seventh Mountain West championship game in head coach Mike Friesen’s 13 seasons and a win will be its sixth championship under Friesen’s direction.

The victory was Friesen’s 150th as a head coach and marked the ninth time his program has reached double-digit wins in a season.

“I thought we did enough to win the game and battle, but the way that the game was going was just brutal. It was not much of a soccer game; it was it was a battle. Fresno (State) did a really good job of just dumping balls in and waiting second balls. And I think we did a good enough job, but it’s not the kind of game we really want to have.

“I think one of the big things is we didn't break. We didn't give away too many quality chances. I thought we defended all the set pieces and you add in all the long throws and that's like getting 20 corners to the game. So, we defended those well and didn't give away a goal there. Those things are huge positives and obviously to get on to the final as a big thing for us.” – head women’s soccer coach Mike Friesen

“We had a lot of energy. Our coach kept on saying that this week, how that have more momentum. So, we brought a lot of energy and a lot of fight to the field today. You guys scored three goals in the span of 13 minutes. I think it was good that we respond to every one of their goals as well. We wanted to get them back because we’ve fought hard to be here, and we deserve to be here. I think we just came with a better mindset and the mindset that we needed to win, and we needed to keep them from scoring on us. It's good that we held up our end of the bargain.” – sophomore striker Taylor Moorehead.

San Diego State, the No. 2 seed, plays No. 1 seed Boise State for the Mountain West Championship on Saturday at 12 p.m. MT/11 a.m. PT.  Streaming video and live stat links are available on the team’s schedule page at www.goaztecs.com.