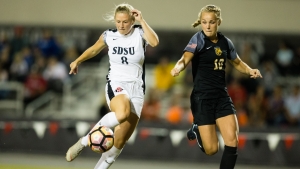 The contest was barely five minutes old when Nikolina Musto chipped a pass through traffic to Chloe Frisch, who punched her shot from six yards out past Colorado College goalkeeper Jade Odom. The goal, which occurred at 5:04, was the sophomore’s second of the season. The assist, meanwhile, was Musto’s team-best third of the year.

SDSU’s lead, however, was short-lived as the Tigers leveled the score just over seven minutes later. Colorado College earned a corner kick, played it short and played it back once more to Jacqui Hand. The forward sent a service into the box and Kelli Sullivan put a foot on the ball and it bounced into the back of the net.

The rest of regulation was a stalemate despite some anxious moments for both teams. The most dangerous sequences came from the Aztecs and occurred after the clock hit 60:00. First up was Taylor Moorehead in the 64th minute. The freshman worked through the CC defense and one-timed a shot that careened off the crossbar. Then in the 69th minute, Sarah Broacha aggressively dribbled past a handful of defenders and into the teeth of the defense, but her shot was stopped by Odom.

After 90 minutes of action, the game moved into overtime. The first 10 minutes was a back-and-forth affair with only one shot taken. The second featured an attacking Aztec offense, but its three attempts did not tickle the twine as the teams settled for the tie.

Nikolina Musto picked up her third assist, the same total she had as a sophomore at Idaho State back in 2016. She now has 11 for her career.

“The positive of tonight was I thought we played with a lot of grit. We got some great performances out of Laura (Fuentes) and Chloe (Frisch). I thought the team showed just a ton of those characteristics that we’re looking for. Our possession was good in the buildup, getting into the final third, but we weren’t dangerous enough. We just need someone to step up and be able to score goals to be more dangerous. Overall, I’m proud of their effort and the mentality of the team, it’s just disappointing to not get the win out of that.” – head coach Mike Friesen