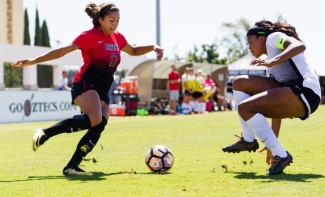 October 6, 2017 (San Diego) - San Diego State and San Jose State played an exciting 110 minutes, but neither team scored as the game ended in a 0-0 draw. The result kept the Aztecs (6-6-1) and Spartans (6-5-1) knotted at 3-1-1 in the Mountain West, which is tied for third in the league standings with Wyoming and two points behind the conference leader New Mexico.

“I’m a little disappointed we didn’t get all three points tonight, but pretty happy that we got the shutout and at least got a point out of the game,” SDSU head coach Mike Friesen said. “I thought we didn’t play our best in the first half, but really played our way in the second half and overtime. We had our chances and their goalkeeper came up big, but both teams missed penalties so it was an extremely exciting game from a fan’s perspective, but from our perspective, we want more out of that game. But we’re happy to be where we’re at. We have to move on and get a result on Sunday.”

Despite not clicking on all cylinders in the first half, the Aztecs were the more dominant team, but with nothing to show for. SDSU was credited with only two shots and continually put pressure on the SJSU backline, only to have the Spartans get the ball out of harm’s way. San Jose State, meanwhile, took only three shots of their own in the first 45 minutes, none of which were threatening.

In the second half, both teams were awarded penalty kicks in the first seven-plus minutes and only 1:35 apart. First up was SJSU’s opportunity in the 51st minute and Yaritza Arista was stonewalled by Gabby English. Then in the 53rd minute, it was the Aztecs’ turn and Mia Root was stopped by Paige Simoneau.

The San Diego State chance that led to the PK was a direct result of finding its rhythm once the second half began. One opportunity, however, came off a SJSU free kick that was ultimately turned over to Aliyah Utush, who raced down the pitch and beat two defenders, leaving just her and the goalkeeper in a showdown. After a 50-yard run, the senior spotted the lower left corner and put a solid boot on the ball, which scooted just past the post.

Less than 13 minutes later in the 71st minute, the Aztecs went on the attack and forced a scrum in the box. A loose ball ended up with Darcy Weiser, who looked to score by putting her shot inside the left post. The well-struck ball, however, took a diving save by Simoneau to keep the score locked at 0-0.

The pace was back-and-forth the rest of the second half with neither team finding the back of the net. Similar to the first half, the Aztecs enjoyed all the high-quality chances in the second period, but this time, outshot the Spartans, 6-5.

In overtime, it was all Aztecs. San Diego State attempted four shots in the first session, but only Utush’s attempt was on goal. Both of Weiser’s shots were blocked, as was Angela Mitchell’s. Then in the final 10 minutes, Utush had the only shot, which was saved by Simoneau.

SDSU finished with 13 shots while only allowing eight and enjoyed an 8-3 advantage in shots on goal. The Aztecs also had more corner kicks, 4-3, with half of SDSU’s coming in the first OT period.

Utush led all players with six shots and four shots on goal. Weiser had three in 53 minutes off the bench and Mia Root added two shots, both of which were on goal. English, meanwhile, picked up her fourth shutout of the season (12th career) and moved her into a fifth-place-tie on the school’s all-time career shutout list.

The Aztecs return to action on Sunday when they play host to Fresno State atop SDSU Sports Deck. First tap is scheduled for noon PT and admission is free. The game will also be streamed on the Mountain West Network.