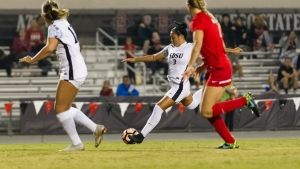 After falling behind early, the Aztecs tied the match in the 26th minute on a Taylor Moorehead goal, but the Lobos tacked on two more to earn the 3-1 victory. The Aztecs finish the year with a 6-10-3 overall record and a 4-4-3 mark in Mountain West play, good for eighth place.

“We gave the game away in the first 12 minutes,” Head Coach Mike Friesen said after the match. “New Mexico came out with tons of energy and we didn’t and that was it. I thought they were better than us and we didn’t give the performance that we needed to to put ourselves in a position to be in the conference tournament.”

The Lobos had the Aztecs on their heels from the first whistle. They tallied nine shots in the match’s first 15 minutes and scored their first goal in the 13th minute. Following a deflection from a SDSU defender, Jennifer Munoz fired a shot inside the left post.

On the Aztecs’ second shot of the match, they were able to score their lone goal. After receiving a pass from Chloe Frisch, Taylor Moorehead scored from just inside the right corner of the box.

“I saw Chloe coming towards me, so I ran out and tried to give her some space for a shot, but then the defender started closing on her so I asked for the ball,” Moorehead explained after the match. “Then I took a touch and saw it was just me and the keeper and I aimed for the far post.”

12 minutes later the Lobos retook the lead when Jadyn Edwards finished a pass from Gwen Maly.

The Lobos held a 13-4 advantage in shots in the first half.

The Aztecs had the first three shots of the second half, putting two of them on goal. However it was the Lobos who would score early in the second frame. Jennifer Munoz netted her second goal of the night when she put away a header pass from Jadyn Edwards in the 53rd minute.

The Aztecs had just one more shot on goal in the game.

Kate Hart (1-1-0) collected three saves, but was saddled with the loss. The Lobos played two goalkeepers with Emily Johnson earning the win and playing 60 minutes. Malia Vanisi recorded two saves in her 30 minutes of action.

“It was really awesome to be honored before the game. I’m glad I chose to come here from Idaho State. It’s been a great fit for me and I really enjoyed playing my last two years here.” -Senior Nikolina Musto on playing her final game of her collegiate career

The Lobos had nine of their 16 shots in the first 15 minutes of the match.

Prior to the match, Nikolina Musto and Kate Hart were honored as part of the senior night celebration.