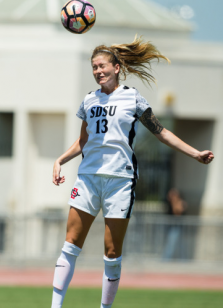 Aztecs fall to 1-3 on the season

“I’m very disappointed in the result tonight,” head coach Mike Friesen said. “I thought we played poorly in the first half and Long Beach State played well and we gave up the two goals. Honestly, it could have been more, but I thought we turned it to some degree in the second half. I felt like our youth and inexperience put us in a hole and a deficit where we showed up thinking the other team wasn’t going to come out and play that hard.

“We have to turn around and get prepared for next week. We want to make sure this team can reach its full potential. We are a very good team that needs to understand that every minute of every game is important. Once we do that, I think we’ll be just fine.”

In the aforementioned first half, the 49ers dictated the action and spent a majority of the time in attack mode. Long Beach State’s first goal in the 34th minute was a direct result of their aggressiveness as Kaitlin Fregulia sent a long ball from the left side near midfield to an onrushing Tori Bolden on the right. It became a race to the goal line, one in which Bolden won, and the senior forward beat the ball before it went out and squeezed her shot into the right side of the net.

Just over seven minutes later, Kayla Cannon sent a cross through the box to Nadiyah Siqueiros, who touched the ball twice, gathered herself, and scored from four yards out. As a result, the 49ers went into halftime up, 2-0.

The Aztecs made adjustments during the intermission and were a different-looking team once action resumed. San Diego State created more chances than the visitors in the first 30 minutes of the half, but it was the final 15 that had the 49ers on their heels.

Aliyah Utush and Angela Mitchell continually put pressure on the LBSU back line and were aided by the midfield play of Chloe Frisch, Nikolina Musto and Rachel Speros. The aggressiveness that benefitted Long Beach State in the first 45 nearly proved fruitful for SDSU, none more so than when Utush beat a 49er defender and found herself one-on-one with goalkeeper Imani McDonald. The senior’s shot from 18 yards out, however, was stopped after an incredible save by McDonald.

Despite being turned away, the Aztecs kept pressuring, which led to a sequence 24 seconds later that resulted in a Mitchell shot being blocked, with the rebound going to Frisch, who had another look, but her 82nd-minute attempt was blocked as well.

San Diego State finished with a 9-8 advantage in shots after being outshot, 5-2, in the first half. Each team, however, had five shots on goal with Long Beach State enjoying a 6-2 edge in corner kicks.

The Aztecs will regroup and prepare for their lone game of the week, a Friday night showdown vs. cross-town foe San Diego. The contest is set for 7 p.m. PT at SDSU Sports Deck and admission is free. The Mountain West Network will broadcast the game online.