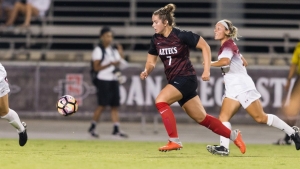 October 14, 2018 (Las Vegas) - San Diego State allowed two goals in the first 12 minutes and could not recover, falling at UNLV, 2-0, Sunday afternoon at Peter Johann Memorial Stadium. The contest was SDSU’s final regular-season road outing of the year before it finishes with three straight home games.

The Aztecs (5-9-2; 3-3-2 Mountain West) found themselves down by one goal before breaking a sweat after Caitlyn Kreutz dribbled past SDSU’s backline and slotted her low shot past the diving Gabby English. The fourth-minute goal was assisted by Katie Ballou.

Less than eight minutes later, Kreutz found herself in the middle of the action again, this time finding Amanda Galbraith, who doubled UNLV’s advantage with a goal in the 12th minute. The two goals were the highlights of a half that featured 17 shots, including eight by San Diego State (5 on target).

SDSU was on the attack early, nearly finding the back of the net on a couple of occasions. Leading the charge were a pair of sophomores in Mia Root and Chloe Frisch. Root took three shots, putting two on target, with Frisch adding two attempts.

After the shock of two UNLV goals in rather short time, San Diego State settled down and escaped the first half unscathed. The second half was fairly even, but on this day, the Aztecs needed more. In the final 45 minutes, SDSU outshot the Rebels, 6-5, and had one more shot on goal than the hosts (3-2). Both teams each had a pair of corner kicks in the second half, but UNLV (9-5-3; 3-3-2 MW) ended the game with a 5-3 advantage.

Frisch finished with a team-high four shots and two shots on goal. Root and classmate Phoebe Leitch also put two of their attempts on frame. English, meanwhile, had six saves in between the posts.

Eleven of SDSU’s 14 shots were taken by either freshmen or sophomores, and all eight shots on goal were attempted by the same group. All 14 shots, meanwhile, were taken by players that will have eligibility left in 2019.

Jordan Girman entered the game in the first half to make her first appearance of 2018. The sophomore logged 35 minutes, the most among the nine players who came off the bench.

San Diego State returns home on Friday to play host to Colorado College at 7 p.m. Admission is free. The game will also stream live on the Mountain West Network.